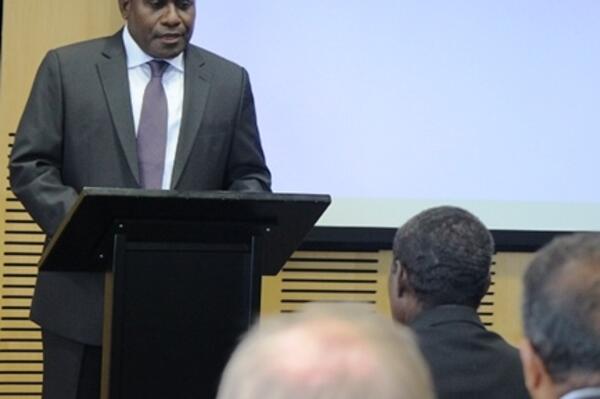 He said although there is a slow pace of investment, Solomon Islands in the last ten years had worked hard in addressing these issues and creating the space for more investment inflows.
Source: Photo supplied
Share
Wednesday, 12 March 2014 12:39 PM

Speaking during the occasion, Mr Lilo acknowledged the interest shown by New Zealand businesses in what Solomon Islands has to offer.

More importantly, the Prime Minister stressed the importance of the partnerships that can be forged between New Zealanders and Solomon Islanders through investment, commerce and enterprise.

“New Zealand and Solomon Islands have enjoyed more than 35 years of cordial relations but in the last five years, bilateral relations have reached new heights as New Zealand established itself as one of the leading donor partners,” Mr Lilo said.

Prime Minister Lilo told members of the New Zealand Business Council that in the area of investments; there is a steady increase in investments in the country as there remains space for expansion.

He said although there is a slow pace of investment, Solomon Islands in the last ten years had worked hard in addressing these issues and creating the space for more investment inflows.

“Solomon Islands are endowed with a significant stock of natural resources in the form of forestry, fish, minerals and natural flora and fauna. Consequently, the economic base has been quite narrow with the focus predominantly on primary production,” Mr Lilo said.

However, the Prime Minister said this also presents the opportunities for investment in these sectors.

“With the appropriate business model, access to resources such as these can form the basis of a long term sustainable enterprise. Primary production of natural resources is still predominantly the mode of production but expansion and new technology in the fields of fisheries, tourism, agriculture, manufacturing, communication technology, transportation and the services industry can provide the opportunity for a long term investment,” the Prime Minister highlighted.

Mr Lilo said the roundtable has identified challenges within important sectors in the country on the high cost of business, the need for predictable fiscal and non-fiscal incentives, and the need for strong enforcement procedures.

Prime Minister Lilo stated that the Government’s reform agenda, which also engages development partners, are working closely to address some of these fundamental problems.
Members of the New Zealand Business Council are proposing to visit Solomon Islands in June this year.
Meanwhile, Prime Minister Lilo has kicked off his state visit.
He is expected to meet with his New Zealand counterpart John Key today.
Mr Lilo will also be officially opening the new high commission building later this afternoon.