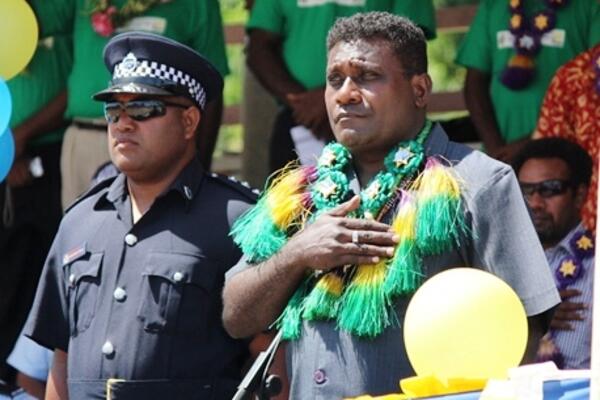 Mr Lilo reminded athletes that the Solomon Games is not only about winning but it is also the spirit of sportsmanship and comradeship.
Source: Photo supplied
Share
Monday, 23 September 2013 10:21 AM

The Prime Minister told athletes that the Solomon Games is an opportunity for the athletes to showcase their talents in various sports at the highest competition in the country.

“The Solomon Games is an important avenue for our top notch sportsmen and women as well as newcomers to stamp their mark and vie for places in regional and international competitions in various teams and disciplines,” MrLilo said.

Prime Minister Lilo said history itself has told that a lot of untapped talents were discovered in the previous Solomon Games — some of whom have gone on to become regional champions.

“Having said that I must also acknowledge that as one of the biggest countries in the region our medal achievements at the regional competitions are unacceptable and I strongly believe that a stronger Solomon Games coupled with good facilities is vital to improving our competitiveness, and ends our regional failings,” he said.

However, Mr Lilo reminded athletes that the Solomon Games is not only about winning but it is also the spirit of sportsmanship and comradeship.

The Prime Minister said that is why athletes must use the given opportunity to advance unity and promote nationalism.

“Sport plays a crucial role in promoting national unity. I recall during the ethnic tension and despite our own challenges, sport remained the uniting factor. This was evident that when our national soccer team played – we put our differences behind – sang the national anthem together and obviously cheered relentlessly ‘go solo go’ behind our national football team. We all celebrated when they won and mourned when they lost,” he said.

MrLilo adds sports have no boundaries and no preferences.

“This is a great example of national unity which need reckoning by all leaderships and at all levels,” the Prime Minister said.