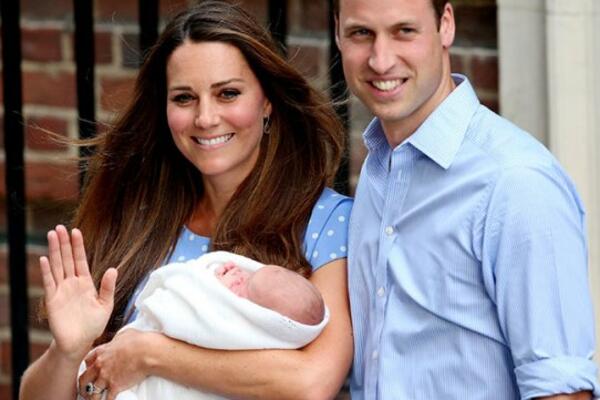 The young family's first public appearance together has been the moment that the world's media and crowds of onlookers camped outside the hospital had long been waiting for.
Source: news.com.au
Share
Wednesday, 24 July 2013 07:39 AM

The brand new Heir to the throne and future leader of the Commonwealth, has been presented to an adoring public for the first time.

Barely a day old, the son of Prince William and wife Kate was shown to the world from the steps of St Mary's hospital in London about 7.15pm local time.

Kate, wearing a blue Jenny Packham dress, was holding the boy first before passing him to her husband.

"He's got a good pair of lungs on him, that's for sure," William told the press, while Kate said the couple was "very emotional" after welcoming their first child, a new third in line to the British throne.

"It's a special time," Kate said. "I think any new parent would know what this feeling feels like."

The unnamed baby raised a tiny hand above his white blankets.

William said the baby was "a big boy, he's quite heavy", and joked: "He's got her looks, thankfully."

The couple were "still working on a name", he added.

After speaking briefly to the press, William and Kate returned to the hospital before re-emerging minutes later with their son in a car seat.

William secured the seat in the back of a black Range Rover parked outside the hospital, before driving his family back to their home at Kensington Palace. Kate's sister Pippa was reportedly waiting for them at the palace.

The young family's first public appearance together has been the moment that the world's media and crowds of onlookers camped outside the hospital had long been waiting for, and the photographs snapped today are likely to be reprinted for decades as the baby grows into adulthood and his role as a future king.

Decades ago, when Princess Diana and Prince Charles carried the newborn William out to pose for photographs on the same steps in 1982.

Earlier, Prince Charles and Camilla came to visit their grandson at 5.30 pm local time. Dozens or hospital staff were brought out the front of the Lindo Wing moments before he arrived in a Jaguar.

Their arrival was met with euphoric rock-star screams from onlookers. Charles and Camilla were clearly delighted at being able to visit their grandchild and the reception they received as they smiled broadly and waved to the crowd.

Prince William and Catherine, Duchess of Cambridge show their newborn baby boy to the world's media outside the Lindo Wing of St Mary's Hospital in London.

The royal baby was earlier visited by Kate's parents, Carole and Michael Middleton, who described him as "absolutely beautiful."

"They are both doing really well and we are so thrilled," Carole Middleton said after spending time with the Duke and Duchess of Cambridge and their child at St Mary's Hospital in central London.

Asked if she had suggested a name for the baby, she replied: "Absolutely not!"

Kensington Palace said Kate, the Duchess of Cambridge, gave birth to the 8 pound, 6 ounce (3.8 kilogram) baby boy at 4.24pm. Monday, triggering an impromptu party outside Buckingham Palace and in front of the hospital's private Lindo Wing.

The palace said on Tuesday that "mother, son and father are all doing well this morning".

As celebratory lights, gun salutes and other tributes were unleashed in Britain and abroad, William thanked staff at St Mary's Hospital "for the tremendous care the three of us have received".

"We know it has been a very busy period for the hospital and we would like to thank everyone - staff, patients and visitors - for their understanding during this time," he said in a statement.