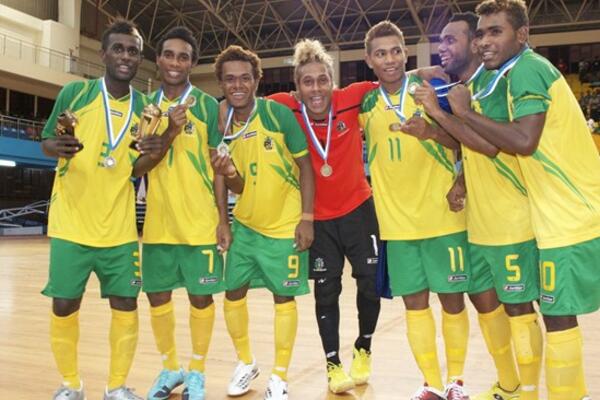 The Solomon Islands have now appeared at two World Cups in succession and proved they can compete on the global stage at Thailand 2012 in December by narrowly missing out on a place in the knockout stages on goal difference.
Source: fifa.com
Share
Thursday, 18 July 2013 09:17 AM

The naming of each country’s squad for the upcoming OFC Futsal Championship Invitational has confirmed there will be plenty of talent on show when the eagerly-anticipated tournament kicks off at The Trusts Arena in Auckland, New Zealand, on July 23.

The event – the first futsal competition to be staged by OFC for two years – will feature five Oceania nations and two special guests from the Asian Football Confederation, Australia and Malaysia.

New Caledonia, New Zealand, Solomon Islands, Tahiti and Vanuatu will fly the flag for OFC while a New Zealand Invitational side, made up of the country’s finest players who were not selected for the Futsal Whites national team, will also compete.

The inclusion of the Asian representatives – made possible by the fact that this year’s tournament is not a regional qualifier for the FIFA Futsal World Cup – is likely to raise the technical standard of the tournament but the pair will not find the going easy against a group of countries who are making steady strides in their futsal development.

The Solomon Islands, for example, have now appeared at two World Cups in succession and proved they can compete on the global stage at Thailand 2012 in December by narrowly missing out on a place in the knockout stages on goal difference. The Kurukuru won their final group match 4-3 over Guatemala to record the nation’s first ever win at a FIFA event. It was also the first victory for a current OFC member at the FIFA Futsal World Cup.

Coach Dickson Kadau has rewarded many of the players who pulled off that ground-breaking success, selecting eight members of the 14-strong squad that headed to Thailand for this month’s showdown at Trusts. Of those figures, the most notable are talismanic captain Elliot Ragomo, the skillful Micah Lea’alafa and young goalkeeper Anthony Talo, who hit the headlines at the World Cup by scoring a remarkable goal despite being in goal himself and only 16 years old. Kadau clearly has one eye on the future and to this end has selected Atana Fa’arodo – brother of football star Henry Fa’arodo, the captain of the Solomon Islands national team – to form the squad’s teenage contingent with Talo.

The Kurukuru were joined in Thailand by former Oceania member Australia and the duo will be joint favourites to lift the OFC Invitational title after dominating the indoor version of the world game in the Pacific region. Prior to their 2006 departure to the Asian confederation, Australia had picked up four OFC futsal titles in a row from 1992 to 2004 but this feat was soon repeated by the Solomon Islands, who notched their four successive titles from 2008 to 2011 as the OFC championship became an annual event.

Australia coach Steve Knight has chosen to shuffle his pack a bit more than his Kurukuru counterpart and will bring only four players to New Zealand that were part of the World Cup line-up. This group – consisting of Daniel Fogarty, Toby Seeto, Chris Zeballos and goalkeeper Angelo Konstantinow – are likely to form the backbone of the side but, with a piece of silverware on offer, Knight has resisted the temptation to blood a raft of youngsters and has therefore included no teenagers.

New Zealand in particular have reason to fear the Futsalroos after suffering a 3-0 series loss to their traditional rivals in the inaugural Trans Tasman Cup last September. Neither side will be going into this month’s tournament with fresh legs however as they are set to meet each other three times in as many days in the next edition of the Trans Tasman Cup in Wellington from July 19 to 21, just a couple of days before the OFC Invitational kicks off.

To meet the demands of such a grueling schedule, Futsal Whites coach Scott Gilligan has turned to experience. There are a wealth of caps in a New Zealand squad that favours seasoned campaigners such as captain Marvin Eakins, Dylan Manickum, Miro Major and Ouadhah Ragued over the exuberance of youth. Major and Manickum will be expected to provide the attacking impetus but the promising Tai Barham, who has played at a high level overseas, may prove to be the star turn.

The Futsal Whites are not the only title hope of local fans however as the New Zealand Invitational side is likewise not short of international experience. Five of the squad have been capped by their country – including the likes of Micky Malivuk, David Plowright and Jan Fischer – and will be keen to prove they are still capable of wearing the silver fern. Veteran Mohamed Hicham Kamri, who has played for his native Morocco, will also be one to watch.

Of the other Oceania sides, Tahiti appear to be the best equipped to mount a title challenge after very nearly knocking the Solomon Islands off their perch at the last OFC championship in 2011 while New Caledonia and Vanuatu will also be competitive after investing plenty of time and effort into their respective futsal programmes.

Malaysia did not qualify for last year’s World Cup but their intent to develop the game is clear and they are sure to offer the Oceania teams a stern test of their abilities. They are obviously not coming to New Zealand simply to make up the numbers, a fact borne out by the extensive nature of their travelling technical staff, a group that includes coach Maizal Marzuki and Spanish technical advisor Marcelo Serpa Coelho, as well as an assistant coach and goalkeeping coach.

The team known as Harimau Malaysia, which means Majestic Tiger of Malaysia, also has plenty of recent match experience after visiting Spain earlier this year to take on club sides in nine friendly matches over a two-week period. They then competed in a four nations tournament in England against the hosts, USA and Poland last month before moving on to South Korea for further action at the Asian Indoor and Martial Arts Games, during which they record their highest ever win with a 16-0 success over Bhutan.