Helen Proud of Her Aussie Wheels 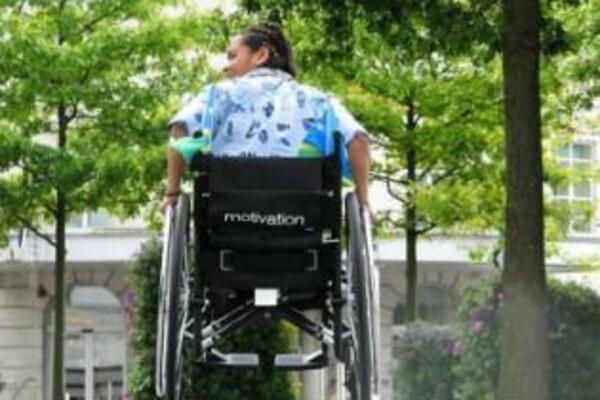 Helen Saohaga, a seated thrower, was offered a wildcard entry to the London Games after contesting her first proper competition in Brisbane in March.
Source: Photo supplied
Share
Monday, 03 September 2012 10:55 AM

One of the proudest people at this morning's flag bearer ceremony for the six Oceania nations to compete at the 2012 Paralympic Games was Hellen Saohaga, the Solomon Islands' first Paralympian and their only competitor for London.

But Saohaga had a smile on her face for another important reason. The shot putter, who was born with seriously deformed legs, had never owned her own seated throwing frame until officials from the Australian Paralympic Committee had one made for her this week.

"We realised last Saturday that she didn't have a frame," said APC vice president, Paul Bird, who is also president of the Oceania Paralympic Committee. "We panicked a bit and started asking around."

Saohaga, a seated thrower, was offered a wildcard entry to the London Games after contesting her first proper competition in Brisbane in March. However, no one at home in the Solomons realised she would need her own seated throwing frame, thinking one would be provided by the local organisers.

Through contacts in Cardiff, APC officials had a fitted chair made for Saohaga and delivered on Wednesday. By that afternoon, she used it to throw for the first time.

"The wheelchair's really helped," said Saohaga, who will take the frame home with her after the Games. "I can move faster and throw further distances now because I'm not so tired. It's helped with my feet too. The skin is very hard but it's softened now."

The effort to assist Saohaga was a pleasing sideline to a special project to integrate the representatives of the six Oceania nations in a pre-Games camp with the Australian team in Cardiff, Wales. The idea was mooted 18 months ago after LOCOG offered a grant and the APC decided to co-ordinate the project. It's given the competitors and staff the opportunity to feel part of a bigger team and to learn a trick or two from the Australians.

"Previously they've competed as their own little countries," Bird said.

"They've sent just four or five athletes and a few delegates and gone into the massive village complex and been lost. But now they can come together as something of a team. We're encouraging them to be there to support each other. We've set up a shared office in the village and a dedicated medical facility for them as well.

"The outcome is that we want is to see them keep developing. We want them to feel part of all of this, but also be ready to take the next step themselves."

Saohaga is taking the next step, improving her throwing style and responding well to the lessons she's learnt in camp.

"I'm very grateful for the opportunity to be in Cardiff before the Games," she said.

"I'm happy because I have learnt so much about the technical requirements of what I do. Had I not had this opportunity I would have looked very bad in the competition. I've gained confidence over these two weeks, observing the Australian team, watching what they do."