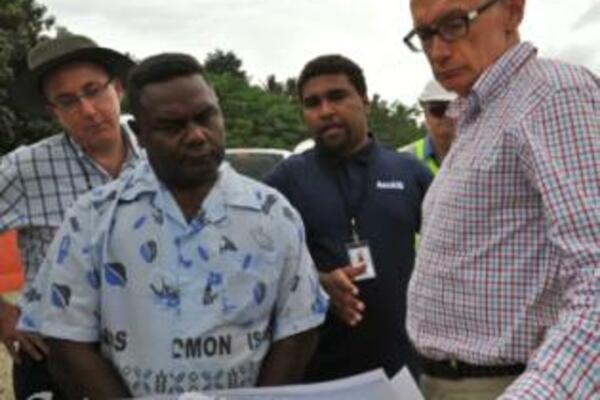 Australia has provided $24 million (SBD 180 million) over the past five years for road and bridge works in Solomon Islands.

"The economy of Solomon Islands is held back by a very low level of physical infrastructure such as roads and bridges," Senator Carr said.

"Australian support for better roads helps people living in rural areas by giving them access to markets and essential services.

"The bridges along this stretch of coast were severely damaged by flooding in 2009 and 2010, temporarily isolating more than 12,000 residents in West Guadalcanal from Honiara.

"The new bridges are stronger so they can withstand future flooding, and engineering works include reinforcing the banks of some of the rivers. This will help ensure that rivers continue to flow under the new bridges rather than damaging the river banks."

"The project has so far constructed 45 bridges and 90 minor crossings on the northern coastal roads of Guadalcanal and Makira Provinces. Some roads were realigned to strengthen the works against further flooding and the impact of climate change," Senator Carr said.

In 2011, Australian support helped to rehabilitate or maintain 450 kilometres of road. Support for ongoing road maintenance under the project has generated 200,000 days of employment for communities that live along the roads, with at least 40 per cent of opportunities taken by women.

The project is a partnership between the Solomon Islands Government, Australia, New Zealand and the Asian Development Bank.

Senator Carr also announced Australia will provide $4 million (SBD 30 million) for the six wharves in rural Solomon Islands to be rebuilt or repaired to ensure safe and reliable access to sea transport.

"With more than 90 inhabited islands, most Solomon Islanders rely on maritime transport to reach rural and remote locations of the country. The construction of new or refurbished wharves will be a major factor in improving access to these remote locations."

Around 16, 500 people will directly benefit from the new or upgraded wharves, which are being built in Malaita (Waisisi and Uhu), Western (Ngasini, Ringgi and Keru) and Isabel Provinces (Tatamna). The wharves are expected to be completed by mid-2014.

The project is managed by the Asian Development Bank in partnership with the Solomon Islands Government.

Australia has committed $30 million (SBD 225 million) in support over four years (2011-2014) for transport infrastructure through Solomon Islands Government's own National Transport Fund, with a priority on improving roads, shipping and aviation services.