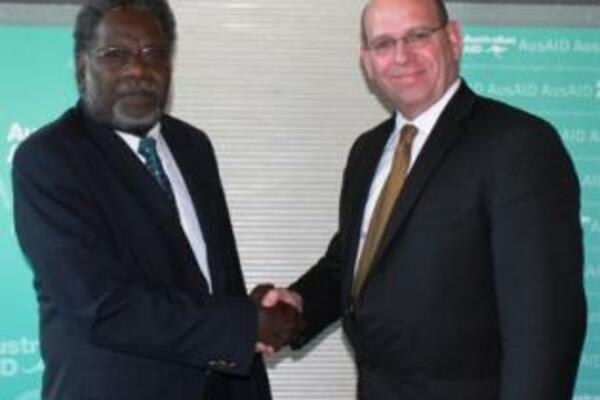 Minister Rini said the Partnership for Development established a vision for the governments of Solomon Islands and Australia to work together to achieve sustainable development outcomes.

"I wish to reiterate our strong commitment to work closely with Australia within the spirit and principles of our Partnership for Development. We will continue to build on the progress achieved and accommodate each other's needs, as we deliberate on the future shape of our development cooperation," Minister Rini said.

Mr Anderson said the talks emphasised the importance of recent AusAID reforms including the new Comprehensive Aid Policy Framework which confirms Solomon Islands as a priority aid partner for Australia into the future.

"Our intention is that the enhanced Partnership for Development will align with Solomon Islands' National Development Strategy. Together, we commit to maximise the effectiveness of Australia's aid under Solomon Islands Government leadership," he said.

Both delegations noted the achievements of the Solomon Islands Government in addressing development challenges with the support of Partnership. These include good progress in fighting malaria, improvements in infrastructure and better fiscal management.

The talks also noted that the RAMSI transition marks a new chapter in the relationship between the two countries.

"The Solomon Islands Government remains committed to and has stepped up to taking leadership of the RAMSI transition process, including managing the transition. Managing RAMSI transition and the aid relationship should be based on a spirit of mutual understanding, partnership and respect for one another," Minister Rini said.

Mr Anderson said RAMSI is entering a transition phase, but it is not ending.

"Most critically, Australian support to policing and law and order is enduring. We recognise that development cannot occur in an unstable, fragile environment," Mr Anderson said.

The two governments agreed in-principle to a new structure for the Solomon Islands Australia Partnership for Development which includes new areas of support which were previously covered by RAMSI.

The talks reviewed the progress and results delivered by the Partnership for Development and set goals for the next 12 months. Australia agreed to support the Solomon Islands Government's efforts to improve financial services, quarantine and rural development. Clear targets for improving health, education and transport services were agreed.

In transport infrastructure, Australian will support the Solomon Islands Government to improve the quality of road transport through increased maintenance. Australian funding will continue to improve access to clean water in urban and rural areas and affordable telecommunications.

Australia will provide an estimated SBD1 billion (A$135.1 million) in development assistance to Solomon Islands in 2012-13. This includes support through the bilateral aid program of SBD528 million (A$70.3 million), aid contributions to RAMSI of SBD 348 million (A$46.4 million) and regional/global programs of SBD138 million (A$18.4 million).