70 Australian Soldiers to Participate in Peacekeeping Mission in Solomon Islands 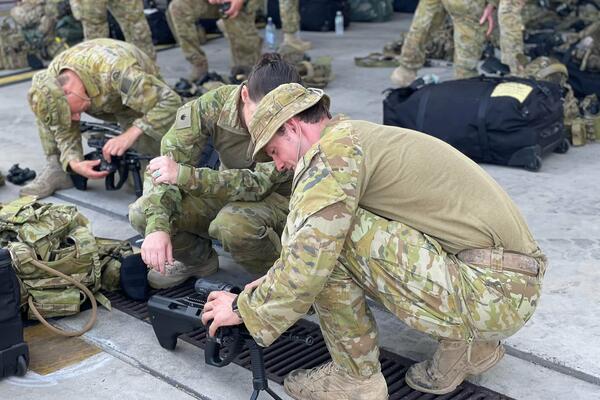 An agreement between friends saw more than 70 Australian soldiers deployed to the Solomon Islands today as violent rioting continues, leaving potential for Australia’s role to escalate beyond peacekeeping.

With minimal luggage, or information on what they were stepping into, troops from Townsville’s 3rd Brigade prepared to deploy at short notice taking only essential gear and weapons as they prepared to “provide stability and security” to the people of the south pacific nation’s capital as it continued to burn into its third day.

The bulk of the deploying contingent came from the 3rd Brigade with 43 military police, infantry and medical specialists. The remaining personnel from 6th and 17th Brigades arrived in Townsville on a C-17 Globemaster from Amberley to pick up troops and continue to the Solomon Islands with touch down expected later today. Additional members of The 2nd Cavalry Regiment remain in Townsville on standby should extra assistance be needed, a Defence official said.

The rapid deployment comes after Prime Minister Scott Morrison announced on Thursday the acceptance of a request for help by Prime Minister Manasseh Sogavare under Australia's bilateral security treaty established in 2017. It comes as Papua New Guinea officials also announce the deployment of 34 peacekeepers to assist.

Mr Morrison maintains Australia will not be “intervening in internal matters” as part of its role to ensure security and provide assistance to the Royal Solomon Police. This is despite protests in the capital Honiara quickly spiralling out of the control of local police overnight, with arson and looting in the Chinatown district and the city centre, and crowds threatening to disrupt parliament.

Speaking in Townsville, Commander of deployable Joint Force Headquarters Major General Jake Elwood steered clear of addressing the geopolitical tensions said to be behind the unrest, largely due to the nation's shift to recognise China instead of Taiwan. Instead, focusing on the positive role Australia holds in the pacific.

“Our relationships with our Pacific nations is vitally important,” Maj Gen Ellwood said.

“They're our friends, and they're our neighbors and we made sure that we maintain very good relations… It really is all about relationships.”

He said it was hard to get a grasp of what soldiers would be faced with until they arrived but acknowledged the situation was worsening.

The Prime Minister said he expected the initial tasking to last between three - four weeks, however as the situation deteriorates it's likely troops could see out Christmas on the Island.

“We've seen over the last couple of days that there has been some destruction, some looting, it's a volatile situation (but) our teams obviously are very well trained and well equipped for the task.”

Maj Gen Ellwood wasn’t able to say exactly what the task would be, declining to indicate Australia’s rules of engagement for the deployment other than to say soldier’s “would be able to defend themselves”.

“We don't provide details about rules of engagement, or what I can tell you is that our soldiers, sailors and aviators can protect and defend themselves,”
“We're going over to support the Royal Solomon Islands Police Force and in particular, it's an Australian Federal Police led mission,” he said.

HMAS Armidale will join the security effort from next week positioning itself off the coast of the Solomon Islands as “the Australian Defence Force makes sure that it maintains a range of courses for different contingencies, and we're always ready to respond quickly,” Maj Gen Ellwood said.

More police, army officers and officials from the Department of Foreign Affairs and Trade followed today.

The escalating violence has left many locals wanting for clean water and access to food following the rapid destruction of infrastructure and looting. When asked what assistance Australia may provide, MAJ GEN Ellwood wasn’t able to respond given their tasking was solely to the local police force.