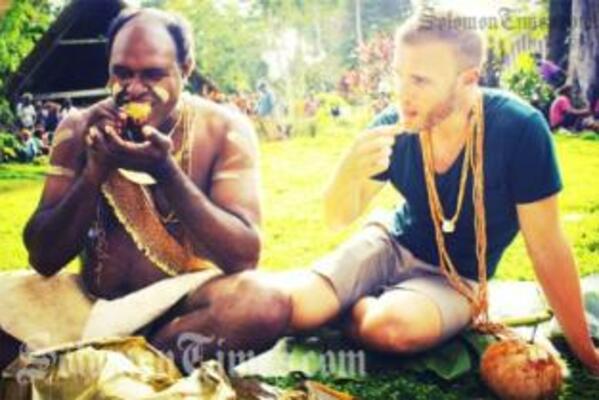 Gary Barlow on a traditional experience with the Solomon Islands Member of Parliament for West Are Are, Hon. John Maneniaru.
Source: travel.aol.co.uk
Share
Tuesday, 10 April 2012 09:04 AM

Last week he was stranded on the Solomon Islands as a cyclone approached the region and on returning home safely Gary Barlow decided to tweet his holiday snaps from the trip.

The Take That singer was on the island in the Pacific filming a documentary on the Queen's Jubilee during a tour of Commonwealth countries and looked like he was enjoying his travels.

In one of the photos he tweeted, he was seen sitting on the grass with the locals and trying some of the local food while wearing beads around his neck. He wrote: 'Having some tea in Solomon islands'.

The star later travelled to the capital Honiara and tweeted another picture while shopping for coconuts on the island.

41-year-old Barlow's trip didn't go to plan when he arrived on the Solomon Islands and a tropical storm left him stranded there.

'We're stranded on an island in the Solomons.There's a cyclone heading our way and there's no way off.Gonna have to sit it out!!' he tweeted.

He soon took to Twitter again and said: 'Powers back on. The lovely government here are sending a search and rescue boat for us this morning #adventure.'

The singer later stopped at Papua New Guinea and Singapore before coming home and spoke of missing his home comforts.

'British Airways put the kettle on! I haven't had a decent cup of tea in 3 weeks,' he tweeted on his way home.

On arriving home Gary wrote: 'Just touched down in the wet and cold UK! Love this place,so happy to be home #stillthebest'