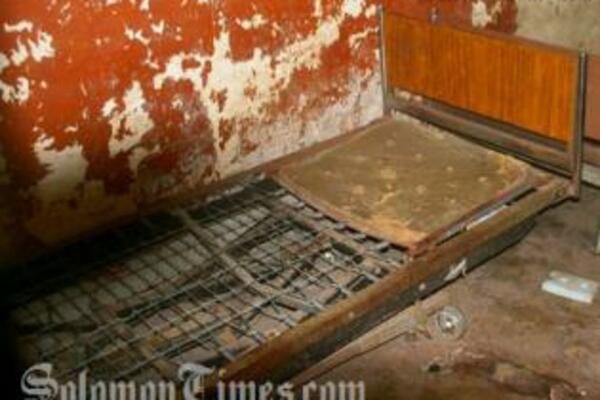 The centre is now dilapidated and as a result is unable to provide even basic health care.
Source: Photo Supplied
Share
Friday, 17 February 2012 09:16 AM

A group of dedicated doctors from Australia have come together to plan, fund, and build a community health project in the Solomon Islands.

All three have connections to the Solomon Islands, having worked there in the past.
However this project was born during a visit by Dr Chris Miller.

In 2003 and 2004 Dr Miller worked as Director of Health and Medical Services in Choiseul Province.

During this time Chris visited the capital, Honiara. Chris met his now wife there and together they moved back to Australia to live in Murwillumbah.

"My wife is from Namuga in Makira which is where this clinic is going to be built and my father-in-law is the paramount chief of that area, him and the local community as well as the local provincial government expressed desire for us to go and help with medical services over there," Chris says.

Namuga (the Provincial Substation of East Makira) is the area health centre that caters to a population of 22,000 people.

The centre is dilapidated and as a result is unable to provide even basic health care.

"It has the worst-looking delivering bed I have ever seen in my life, it's harboring disease rather than helping babies be born," Chris says.

"It has a concrete structure that has holes everywhere in it, everything is falling apart, there's only one nurse aid there, and the cupboards are empty of medicine. As you'd imagine they have significant problems with high rates of neo-natal mortalities and still births.

"Within the last few weeks there's been a 28-year-old mother of two that has died while being transferred to Kirakira, a lady who had metastatic ovarian cancer who didn't even have panadol as pain relief, and a newly born baby that died of pneumonia without adequate treatment - these are the sort of problems that they have."

"It's hard as a human being to see other humans suffer, but as a doctor it's what we're supposed to be doing."

Dr Jonathan Stephens agrees, adding that it was a big eye opener for him when he saw the conditions at the facility, describing them as "very primitive and certainly neglected."

Chris says he and the team initially saw the project as a small one, an "ad-hoc clinic type of situation."

"And it's rapidly turned into the building of a hospital," he says.
The aim of the project is to deliver healthcare to 22,000 poor and disadvantaged people in the eastern half of Makira.

The plan is to build a hospital with up to 20 beds, an inpatient and outpatient facility, operating theaters, and a delivery ward. Fly-in doctors will perform operations after the patients have been seen by a local GP.

"Because the surrounding population are mainly subsistence farmers, they don't have enough money to travel to the major centre for any operations, this would bring healthcare to them," Chris adds.

This will hopefully reduce the incidence of maternal mortality, perinatal mortality, childhood mortality for children aged under five, malaria, tuberculosis, obesity, diabetes, cardiovascular disease, cancer, malnutrition, and domestic violence. The healthcare objectives of the project are aligned with that of the Solomon Islands' Ministry of Health, and the Australian Agency for International Development (AusAID).

The Solomon Islands' Ministry of Health has pledged to appoint 15 nursing staff to the clinic once completed on an on-going basis. Several pledges have also been received from Australian doctors interested in providing medical care for two weeks a year per doctor.

The new clinic will include 18 self-contained cottages to house health care staff. It is envisaged that this will help retain local health workers and entice volunteer doctors from Australia and other countries to provide expert medical services on a rotational basis.

Sixteen of these clinics are to be constructed by the villages within the catchment area of the Namuga clinic, and two by the provincial government.
Dr John Moran says it is very important that the hospital be run by Solomon Islanders for Solomon Islanders.

"The idea is for it to be run by Solomon nursing staff and they would be the on-site people running it, so it'll be a nursing-run clinic, with visiting doctors both nationally and internationally," John says.

"We think that will give them far more ownership and a far greater likelihood that it will continue on into the future, and give it a long life hopefully."