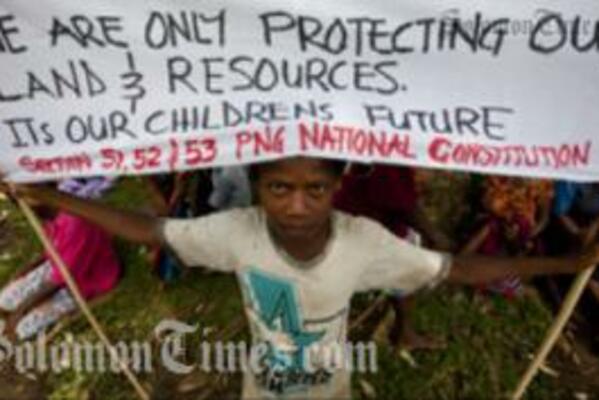 What would you do if you saw a bulldozer move across your front yard and start smashing your home and garden to bits? Then the bulldozer driver told you that a big company now owned your land and could do what they wanted with it for the next 99 years.

Imagine your land wasn't just any land - it was full of ancient rainforest trees and rare animals and fish which had provided you and your family with a livelihood for many generations. Your great grandparents had taught you how to live off the land, how to read the weather, how to identify plants for medicine, how to fish and how to sustain your family without hurting the delicate natural balance of the forests and the rivers.

Then one day it was stolen from you - your forests, your livelihood and your precious land was taken away for three generations and no-one had asked your permission.

In front of your eyes, they were logging your forest and ripping your land apart as quick as they could, leaving nothing for you or your children. When you protest, police are flown into your community to intimidate and abuse you. They have been paid by the logging company.

This is the reality for hundreds of communities in PNG today. Under a new lease system called SABLs (special agriculture and business leases), logging and agriculture companies are stealing land and forests from customary landowners. Already, 5.2 million hectares of forest is slated for destruction in what has been described as the largest land grab in PNG history. Multi-national companies such as the notorious Malaysian logging giant, Rimbunan Hijau, are tearing the heart out of traditional village life and making massive profits from land and forests they have obtained under fraudulent leases.

At the request of local landowners, the Greenpeace ship, the Esperanza recently spent two weeks in the remote Pomio district in PNG, exposing one example of this corrupted lease system and the illegal and rampant logging it allows. We spoke to landowners who had been beaten up by task force police and locked in shipping containers, we spoke to kids whose names had been falsely used to sign away community land for 99 years and we met women who were terrified for their children's future - a future without the forests and the land which sustain them.

Anna Sipona, a local woman leader from Malmal village said: "Every day I cry for my land, the land is the very source of our existence...our life. Many of us are confused - the company just came and took our land. Our gardens are destroyed, what can we do now, we live off what is in our garden?" Find out more from Post Courier article

Greenpeace also travelled to the national capital, Port Moresby, to petition politicians to overturn the leases and stop the logging. Over 6000 people have emailed the PM Peter O'Neill asking him to freeze the logging and choose the rights of his people over company profits. 550 landowners from the Pomio district have also joined together to ask for their land to be returned and the destruction to stop.

Another stirring appeal came from the former PNG Prime Minister and founding father, the honorable Sir Julius Chan. In his speech to welcome the Esperanza, he talked of the need for action: "...if we stand together, then there is no force on earth that can prevent our hope from lifting our people to a higher level of satisfaction."

As PNG heads towards the 2012 elections, Greenpeace and its partner NGOs will continue to stand beside the landowners of PNG in their fight for a fairer future and for the forests they call home.