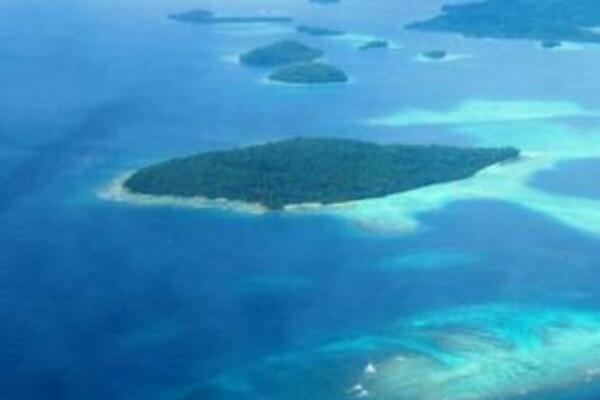 An Ariel shot of Fauro Island in the Shortland Islands.
Source: Photo Supplied
Share
Monday, 16 May 2011 09:17 AM

Unconfirmed reports state that a group of heavily armed bandits raided the Fauro Mine Site and stole very expensive equipments and gold samples.

Reports from Shortlands say that a group of heavily armed man arrived in at least three outboard motor engine boats and raided the Fauro Mine Site early this morning.

"We are told to stay put in the village and not to go out fishing today. We have been advised that it is possible that these people are still hiding in the Islands," said one villager from Nilla in the Shortland Islands.

The person spoken to claimed that the armed bandits came from Bougainville, a claim difficult to verify at this point.

"We were told that they might be hiding in the little Islands waiting to cross back to Bougainville at dark."

"It would be hard to verify such claims, but if it is true than it will be very serious, as it is a cross border raid," said a senior police officer who did not want his name or rank disclosed. "Investigations are underway and we will act accordingly once the details are made clear."

The Ministry of Foreign Affairs did not have any comments to make, although they say that they will follow the investigations closely.

The Office of the Prime Minister was also tight lipped, stating that they will release a statement once they receive the actual report from police outposts in Shortlands.