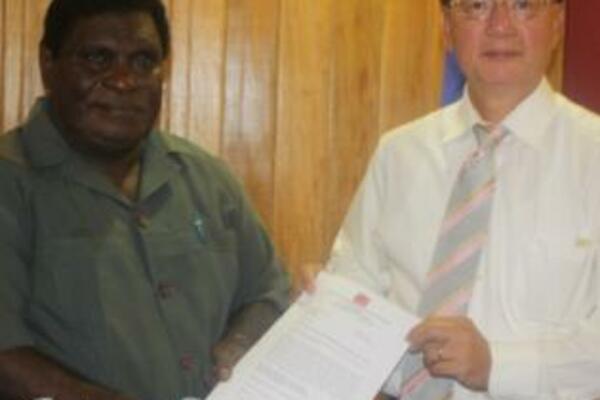 The Government of the Republic China has formally handed over funds totaling SB$1.85 million (US$234,000) towards the Solomon Islands National Parliament Office Complex Solar project.

The Project will be implemented by Motech Industries INC together with the Ministry of Mines, Energy and Rural Electrification.

Ambassador Wu said the project was part of a series of projects that Taiwan has been supporting for the Government and people of Solomon Islands.

Taiwan had also funded a SBD$ 10 million solar lighting project for rural schools, in 2010 with a solar power demonstration set which was erected at the Prime Minister's Office complex.

In addition Taiwan has also provided support on similar projects for "Community Schools Electrification Project for Rural People" and the "One Student, One solar lamp Pilot Project" worth SB$ 10.5 million.

"This project demonstrates ROC (Taiwan)'s commitment and dedication to the important cause of Solomon Islands in its efforts to promote and provide reliable, affordable, clean and sustainable services to various communities of this country," said Ambassador Wu.

Meanwhile, Prime Minister Hon Danny Philip said "this project is in line with NCRA Government's continuing focus on renewable energy and it reflected the closed partnership that both countries have enjoyed in the field of renewable energy for the last few years"

Prime Minister Philip expressed the Government's appreciation and gratitude to the Government of ROC (Taiwan) for its continuing support and assistance towards Solomon Islands development endeavors.

He assured that Solomon Islands Government would remain committed to work closely with the ROC (Taiwan) to strive to advance common interests for both countries.