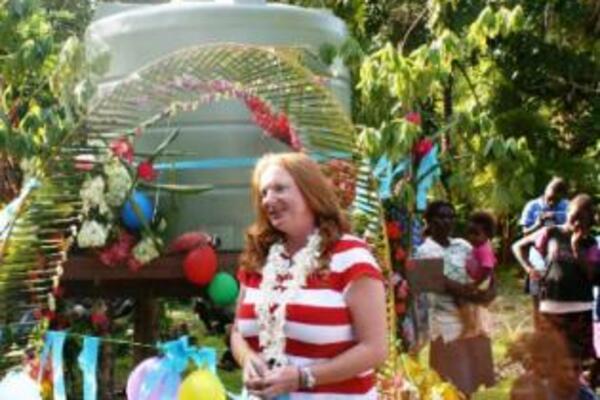 The community's previous water supply system was badly damaged during the 2006 tsunami, forcing residents to walk up to two kilometres up a steep hill to collect water. The aid post in Maravari also had no access to fresh water, which resulted in delays in assisting patients as water was collected.

The new tanks provided by the Australian High Commission are now in use and have helped to improve the living standards of the community.

Ms Duncan was accompanied in her visit by the Provincial Member for Ward 8, Hon Alison Lemopala, who gave a heart-felt speech to the crowd that gathered to witness the ceremony, telling them to look after the water tanks which were a blessing to the community and thanking Ms Duncan for Australia's assistance.

Ms Duncan said Australia welcomed the opportunity to assist Solomon Islands communities in need. She said "Most Australians are lucky enough to have access to a clean water supply and other basic necessities of life. So they want to be able to help our neighbours who are less fortunate."

Ms Duncan explained that "the Australian Government's aid program is channelled mostly through the Solomon Islands Government, but we also assist communities directly through small programs like our Direct Aid Program."

Chairman of the Maravari Aid Post, Mr Nelson Moa, said the tanks had "really helped our community, especially by providing clean water to the aid post, which we hope will soon be upgraded to a clinic".

The water tanks were provided through the Australian High Commission's Direct Aid Program, which helps communities to improve their living standards, particularly in the areas of health and education.

In 2010, the Australian High Commission assisted 14 communities in Central, Isabel, Malaita and Western Provinces with water supply projects, in addition to a number of other projects in these and other provinces.

Applications for the Direct Aid Program can be obtained from the Australian High Commission office in Honiara.