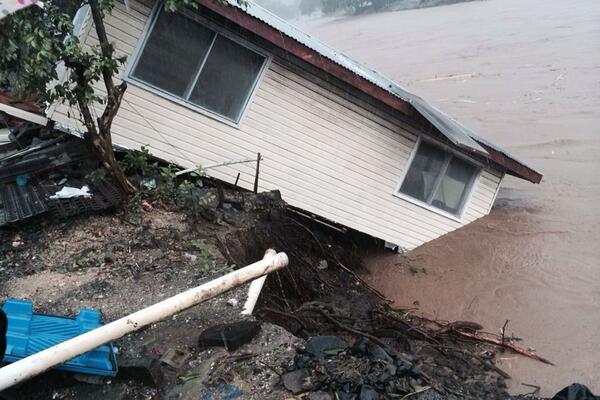 In what has been described as possibly the worst floods to have hit Honiara town, hundreds of families are now taking shelter at various evacuation centres in Honiara.
Source: Michael Kisu - Facebook
Share
Friday, 04 April 2014 09:51 AM

The police have confirmed to Solomon Times that 6 people have lost their lives due to the flash floods late yesterday afternoon, while at least 30 are still missing.

“We are urging the public to refrain from embarking on their own search and rescue efforts...we are doing the best we can so it is safer that they remain at home,” stated the officer in charge of the police rapid response team, set up specifically for the current disaster.

In what has been described as possibly the worst floods to have hit Honiara town, hundreds of families are now taking shelter at various evacuation centres in Honiara.

“We have set up various evacuation centres in West, Central and East Honiara...really it’s because of the scale of those that have now been temporarily displaced,” stated Loti Yates, the Director of the National Disaster Management Office (NDMO).

“This is by far the worst flooding I have witnessed since heading this organization, the scale and magnitude is overwhelming.”

"It is important to coordinate our response, we are meeting again this morning, and there have been alot of support from our key donor partners, so we should be able to respond to the situation effectively...at least in Honiara."

The Solomon Islands Meteorological Service has warned that heavy rain will continue into the weekend.

The storm is associated with a tropical low moving southwest across the Solomon Islands.

The US military’s Joint Typhoon Warning Center has posted the storm as a potential cyclone and says the chances are high that it will turn cyclonic.

It projects that it will head south into the Coral and Tasman Seas toward New Zealand.