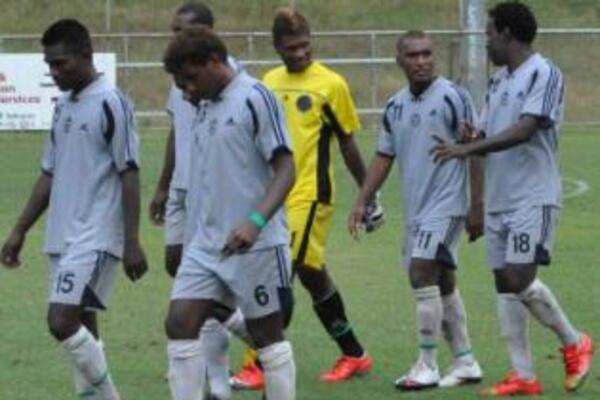 The basis of SIFF's argument was that the Pacific Games is recognized by the Oceania Football Confederation (OFC) as the preliminary rounds of the FIFA World Cup qualifiers.
Source: Photo Supplied
Share
Friday, 03 September 2010 09:10 AM

The football fraternity and football fans in Solomon Islands received their best news yet this year with the announcement that football is among the sports approved for the 2011 Pacific Games.

The announcement was made yesterday by the National Olympic Committee of Solomon Islands (NOCSI) and comes after an uneasy time for football in Solomon Islands as it faced uncertainty about its place in the next edition of the Pacific Games.

Earlier this year NOCSI announced that football is not one of the sports automatically selected for the Pacific Games. Instead, NOCSI said football will have to go through a justification process.

As the custodian of football in the country the Solomon Islands Football Federation (SIFF) was put under immense pressure to convince the NOCSI Justification Committee that football should be given a chance to participate.

The basis of SIFF's argument was that the Pacific Games is recognized by the Oceania Football Confederation (OFC) as the preliminary rounds of the FIFA World Cup qualifiers.

SIFF, thus, pushed that if NOCSI were to rule football from the Pacific Games then that would effectively mean that Solomon Islands is being denied an opportunity to compete in the qualifying games for the 2014 FIFA World Cup in Brazil.

This explanation was submitted to the NOCSI Justification Committee in paper and also during a face to face session held last week.

All of SIFF's efforts have now been rewarded with this announcement and the SIFF is happy about NOCI's decision.

SIFF President Martin Alufurai said that the decision is an obvious one considering how much effort SIFF has put into development both at the technical and the infrastructure level.

"The decision NOCSI made is an obvious one from a football point of view," Alufurai said. "We are happy that a positive attitude is taken towards football in this case."
"SIFF presents total football which address the development of coaches, referees and players for national teams not only for the 2011 Pacific Games but for competitions that lie further ahead in the future."

It is believed that NOCSI's decision to include football in the justification process is based on the performance of the Solomon Islands National Football Team's performance in the 2007 South Pacific Games.

Women's football is among the list of teams who are given a conditional spot in the Pacific Games listing. A final decision on whether they will go will be made if favourable progress is seen in their preparations.

Other sports including indoor volleyball, women's basket ball and table tennis have not made it into the NOCSI list for the Noumea pacific games.