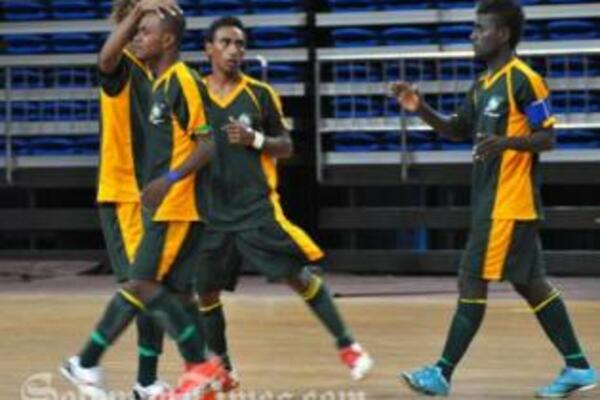 The Kurukuru take a break today while the Futsal Whites face another tough challenge in Vanuatu.
Source: www.oceaniafootball.com
Share
Tuesday, 10 August 2010 09:29 AM

A four goal haul from Micah Lea'alafa has guided the Solomon Islands to an 8-4 victory over New Zealand at the OFC Futsal Championship in Suva yesterday evening.

But it wasn't all plain sailing for the Kurukuru as New Zealand came out fighting in the first half with three goals from Micky Malivuk to go 3-2 up at the break.

The physical presence of Malivuk caused problems for the Kurukuru while at the other end goalkeeper Elias Billeh kept his side in it with some specacular saves against the likes of Elliot Ragomo and Jack Wetney. Only Lea'alafa and Jenan Kapu were able to find the back of the net in the first period.

It must have been inspiring words from Solomon Islands coach Dickson Kadau at half-time as the team took things to another level in the second half.

Lea'alafa kicked things off again with a goal inside the first minute while Jack Wetney added his name to the scoresheet less than five minutes later.

A thunderous Lea'alafa strike from 12 yards made it five for the Solomons on 29 minutes and things only got worse for the Kiwis as the 19-year-old grabbed his fourth less than a minute later.

New Zealand captain Marvin Eakins got one back soon after before Elliot Ragomo put the game out of reach with a late double to set off the lively crowd.

The Kurukuru take a break today while the Futsal Whites face another tough challenge in Vanuatu.