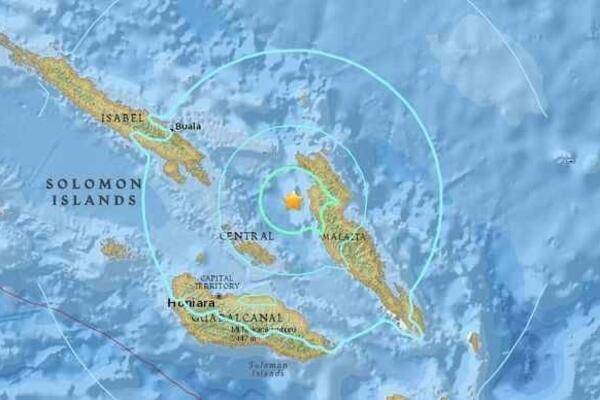 There are no reports of victims or damages caused by the earthquake. No tsunami alert has been declared.
Source: Supplied
Share
Tuesday, 16 January 2018 08:01 AM

The US Geological Survey has reported an earthquake near Auki in the Solomon Islands, no tsunami alert has been declared.

There are no reports of victims or damages caused by the earthquake. No tsunami alert has been declared.

Solomon Islands is prone to earthquakes as it sits on major fault lines along the Ring of Fire. This is a belt running around the Pacific Ocean where a large number of earthquakes and volcanic eruptions occur.

Back in 2007 a massive earthquake triggered a tsunami that struck Gizo in the Western Province, wiping out more than 6 villages, killing 52 people.

Since than alot of work has gone into tsunami drills at schools and coastal communities, a recent example is a tsunami evacuation drill held in two schools in the Titiana Community in Gizo, Western Province.

It was supported by the government of Solomon Islands and Japan, and the United Nations Development Program (UNDP). Nearly 400 students and teachers were mobilized, testing the schools’ emergency management plans and newly constructed evacuation routes.

With images taken from drones and stories gathered from the communities, the agencies in collaborations with the two schools banded together to collect data, and conduct a tsunami risk assessment. They also produced tsunami hazard maps, and identified evacuation routes and safe areas.

The work resulted in the creation of new emergency evacuation plans, and construction of evacuation routes.