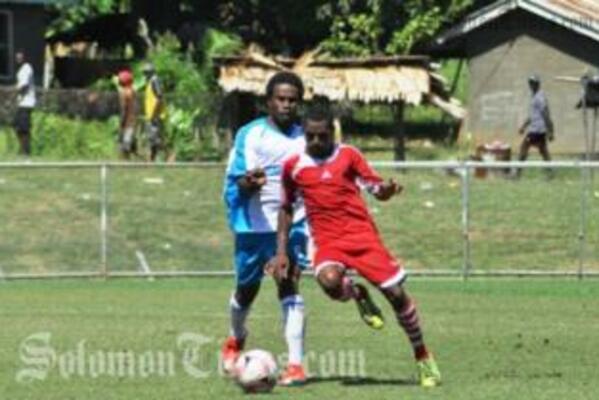 The 2010 edition of the Our Telekom National Club Championship continues to come up with surprises and the biggest surprise of all was saved for the quarter finals.

Most people were expecting Makuru to use their quarter final meeting with championship new comers Rendova Devon as a training match for the semi finals. The result, however, is beyond the wildest dreams of Rendova Devon fans as they saw their team upset the former O-League and Honiara Football Association league leaders by 2 - 1.

Makuru went into the match minus their most influential player George Lui who is serving suspension after receiving a red card in their group match against South Central Gold.

Rendova Devon went in to the game at full strength and their biggest advantage was that they were underdogs and had nothing to lose unlike their opponent who had everything to play for.

It took less than a minute for Makuru to take the lead in the game. Dennis Ifunaoa was the creator and the experienced George Afia was the finisher. Ifunaoa sent in a beautiful cross that floated perfectly for Afia to hammer home with a header.

Despite taking the early lead Makuru were not able to put their stamp on the game as the Rendova Devon players kept the ball moving and were playing at their best level. Alban Pita was leading the attack for Rendova Devon up front and he caused some scary moments for the Makuru defenders.

Makuru had many chances to increase their lead in the first half but their efforts were not well utilized and the 1 - 0 lead they had remained until halftime.
The second half was where the real excitement began.

Makuru were also looking to close the game but they were repeatedly frustrated by the Rendova Devon backline. At full time the 1 - 1 deadlock could not be broken so the match went into extra time.

It was in extra time that Rendova stepped up the pressure to win the game. Two (2) minutes into the first half of extra time they won a penalty after Leslie Leo fouled Luke Kapitana inside the Makuru 18 yard box. Fredy Kini stood up for the penalty kick and caught replacement Makuru keeper Leon Lekezoto flat footed as he blasted his shot into the back of the net.

Even with their lead Rendova Devon appeared unsatisfied and pressured Makuru to extend their advantage. Makuru were also trying to get back in the game but could not break through the Rendova Devon lines.

In the end Rendova Devon held on to win the match and qualify for the semi finals of the championship. They will meet the winner of the third quarter final, between Soloso and Solomon Warriors.