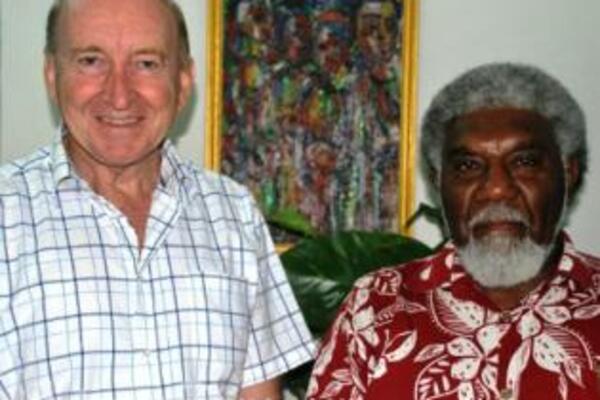 Speaking in talks with RAMSI Special Coordinator, Graeme Wilson, who was on a four-day visit to Vanuatu last week, Mr Natuman said that, as a member of the Mission since its inception, Vanuatu remained committed to continuing its contribution to RAMSI.

"We believe that RAMSI is doing a good job in Solomon Islands and Vanuatu will continue to be part of the Mission for as long as is needed," he said.

Mr Natuman, who hosted a dinner for Mr Wilson with former members of Vanuatu's various contingents to RAMSI, said his country particularly appreciated the experience that serving in RAMSI provided its officers.

Vanuatu has sent more than 30 officers to RAMSI's Participating Police Force since the Mission first deployed in July 2003.

Mr Wilson took the opportunity to thank the people and Government of Vanuatu for their ongoing support for RAMSI.

"We really appreciate the strength and constancy of Vanuatu's support for the Mission; participation from the region is the backbone of RAMSI and will continue to be the key to the Mission's ongoing success," Mr Wilson said.

Mr Wilson also took part in a special memorial service in honour of the former head of Vanuatu's Contingent to RAMSI, the late Chief Inspector Amos Solip, who passed away in his sleep during his deployment to Solomon Islands in April last year.

Commissioner Bong said Chief Inspector Solip was the first ni-Vanuatu to die in the service of peace overseas.

"The Vanuatu people have lost a committed public servant and a loyal and much loved police officer," Commissioner Bong said.

"Having said that, I wish to assure RAMSI, that despite this loss, Vanuatu will continue to fulfill its regional obligation...our combined efforts in the Solomons clearly demonstrates our care for one another and the desire to ensure the Pacific remains a conflict free zone."

During his visit to Vanuatu, Mr Wilson also spoke to the Acting Minister of Internal Affairs, Paul Telukluk, Ralph Regenvanu MP, the Leader of the Opposition, Ham Lini, the Director General of Internal Affairs, George Bogiri, diplomatic representatives and the Executive Director of the Pacific Institute of Public Policy, Derek Brien.