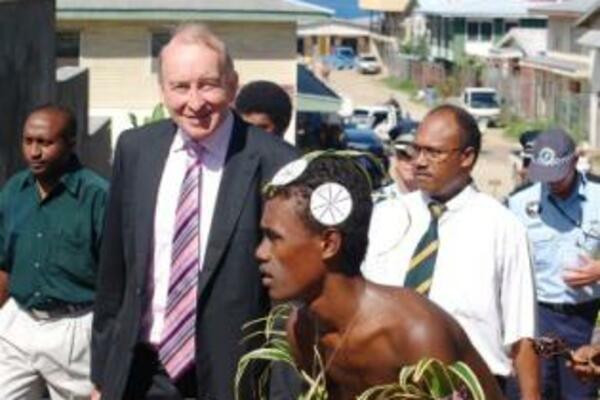 Sir Albert Palmer CBE, who officially opened the court house with the unveiling of a carving of the Solomon Islands coat of arms, described it as 'the face of justice' in the country.
Source: Photo Supplied
Share
Friday, 07 May 2010 08:53 AM

Solomon Islands Chief Justice, Sir Albert Palmer CBE, who officially opened the court house with the unveiling of a carving of the Solomon Islands coat of arms, described it as 'the face of justice' in the country.

"This is where the battle for justice, for legal rights, for the truth and the culpability of a crime can be determined without having to resort to violence or the use of force," Justice Sir Albert Palmer said.

"It is where the rich and the poor, the weak and the strong, the offender and victim, the citizens of this country can come to have their grievances and disputes in law heard on a level playing field by an impartial, independent and objective adjudicator."

The importance of a strong justice sector, in which the new Auki Court House would play a crucial role, could not be underestimated in the broader development of Solomon Islands, he said.

"We have seen for ourselves what the breakdown in the rule of law can do to a nation... You can have the best leaders and Government in power but if the rule of law and justice are weakened, the nation will crumble."

The Chief Justice called on the judiciary to perform their roles in 'an impartial, fair and just manner'. "The onus is now on the Magistrates' Court to deliver the goods, the justice that the people of Malaita deserve; justice that is efficient, effective, timely and just."

In formally handing over the building, RAMSI Special Coordinator Graeme Wilson said that alongside the strengthening of the Royal Solomon Islands Police Force and the opening of the province's new Correctional Centre, the new Malaita Magistrate's Court meant Malaita was now leading the nation in the development of its law and justice sector.

Malaita Province Premier, Hon. Richard Irosaea, who has been an important advocate for the new court house, said that the 'rehabilitation' of judicial infrastructure in Malaita, was vital to the long-term prosperity of Malaita.

"The focus on 'rehabilitation' of our law and order infrastructure is not only about fixing the current problems," he explained. "These are developments that are vital to the long-term future of our province."

Solomon Islands Minister for Justice, Augustine Taneko, said that the opening of the courthouse would ensure Malaitans had improved access to the Solomon Islands justice system.

"The presence of this building and those who will work in it is a positive development for Malaita Province," he said.

"More and easy access to justice services should pave the way to a more safe and secure community and a good place to live, work and invest in."

The opening was attended by over 80 people from the Solomon Islands Government and judiciary, along with representatives from communities in and around Auki.

Built by the local businessmen/tradesmen, Paul Maneipuri and his company MP Construction, the Malaita Magistrates' Court project employed over 250 Malaitans on site, with nearly SBD 8m spent in Solomon Islands on the construction, including over SBD 1.7m spent directly in Malaita.

The Malaita Magistrates' Court will be able to hear cases for the Solomon Islands High Court, Magistrates' Court in addition to other civil and land cases. The new precinct also includes offices for the Office of the Director of Public Prosecutions and the Public Solicitor's Office.

Yesterday's opening also saw the unveiling of artworks created by the students of four schools around Auki: Auki Primary School, Alota'a Primary School, Auki Community High School and Aligegeo Provincial Secondary School. The artworks, which cover the themes of 'Community', 'Family', 'Friendship' and 'Peace' will be permanently displayed in the new complex.

Court proceedings will commence at the Malaita Magistrates' Court precinct in the coming weeks.