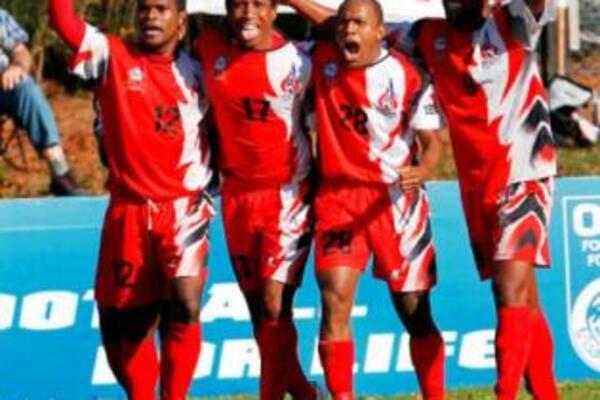 In a moving tribute, Papua New Guinea club champions Hekari United have dedicated their historic 2010 O-League title win to all Pacific Island nations striving to reach the top in football.

Despite a 2-1 loss to a Waitakere United at Fred Taylor Park in the return leg final yesterday afternoon, Hekari claimed their first OFC Champions League title win with a 4-2 aggregate score over two legs and became the first team from outside New Zealand or Australia to qualify for the FIFA Club World Cup.

Two-time champions Waitakere showed early intent with a Neil Emblem goal in just the third minute but Kema Jack equalised from the penalty spot on 35 minutes after Alick Maemae was brought down by goalkeeper Danny Robinson.

On what was a perfect autumn day, the home side pushed for goals throughout but could only manage one more in the 84th minute when Brent Fisher converted from the penalty spot following a foul on Dakota Lucas.

Hekari manageress Vonnie Eteaki Kapi-Natto, who has been with the team since it was established in 2003, expressed just what it mean to the team following the match.

"I never dreamed to come this far. We've been working for it but I never thought we would come to this," said Kapi-Natto.

"I want to dedicate our success to all the Pacific Island nations. I'm sure this will be good motivation for our children and young people because they've see that their brothers can compete and win at this level."

Hekari got off to a poor start, conceding early when Martin Bullock's corner was met with a powerful header from Waitakere player-coach Neil Emblen.

Waitakere should have doubled their lead on 14 minutes when Benjamin Totori rounded the keeper and played a ball across the six-yard box for the waiting Allan Pearce and Martin Bullock but scrambling defence from Hekari somehow kept the ball out.

Just after the half hour mark, Alick Maemae was brought down in the box by Waitakere goalkeeper Danny Robinson who received a yellow card for the late challenge. Kema Jack converted from the spot to give his side a crucial away goal on 35 minutes.

Waitakere threw everything at the visitors in the second half, hitting the woodwork in the 54th and 55th minutes before Jack Pelter's shot in the 57th minute was cleared off the goal line. But Brent Fisher's penalty late in the game proved too little too late for the home side.

Speaking after the match, Emblen says he was surprised by Hekari's choice to stick with a 4-4-2 formation and push numbers forward on attack.

"If we had gone to their place with a 3-0 lead we probably would've played with a sweeper and one up front with two wide ones. But I think they were very bold in what they did and they will feel it worked for them," said Emblen.

"I thought after our goal after two minutes we were going to go on and do the job. From set plays and balls into the box they looked vulnerable but we just couldn't capitalise."

"We had a mind to play attacking football. You could see that we weren't holding our strikers back. That was part of the strategy and they did well."

The Papua New Guinea side will now head to the FIFA Club World Cup in UAE this December which Mana admits it will be a tough challenge.

"That's another step up. Here we know the standard but there it will be a lot higher. We know it's not going to be easy but we will work hard."

The FIFA tournament in Abu Dhabi will include a minimum payday of US$500,000 - a huge boost for Papua New Guinea football and motivation for other Pacific Islands clubs eager to achieve similar feats.