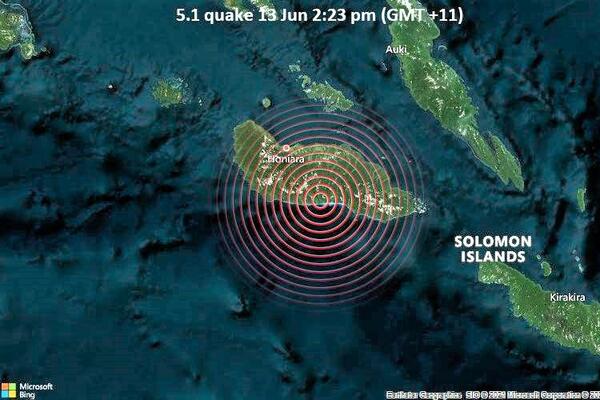 Based on early assessment no significant damage was caused by the quake, in Honiara or villages close to the epicenter.
Source: EM
Share
Monday, 14 June 2021 09:06 AM

An earthquake with a magnitude 5.1 struck Guadalcanal on Sunday.

The quake occurred 47 km southeast of Honiara, the capital of Solomon Islands, the German Research Centre for Geosciences (GFZ) reported.

The quake hit at a shallow depth of 10 km beneath the epicentre near Honiara, Solomon Islands, early afternoon on Sunday 13 June 2021 at 2:23 pm local time.

The exact magnitude, epicentre, and depth of the quake might be revised as seismologists’ review data and refine their calculations, or as other agencies issue their report.

A second report was later issued by the United States Geological Survey, which listed it as a magnitude 5.0 earthquake. A third agency, the European-Mediterranean Seismological Centre (EMSC), reported the same quake at magnitude 5.0.

Based on early assessment no significant damage was caused by the quake, in Honiara or villages close to the epicenter. No tsunami warnings were issued by the MET service in Honiara.