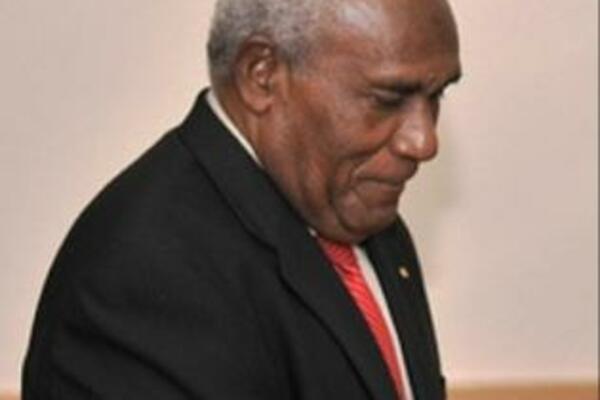 Election date has been proclaimed by the Governor General as Wednesday 4 August 2010.
Source: STO Archives
Share
Wednesday, 23 June 2010 08:49 AM

Despite the early unofficial announcement, yesterday's proclamation by the Governor General, Sir Frank Kabui, has begun the official timetable for the National General Election, starting with a two week nomination period for candidates.

Chairman of the Electoral Commission, Rt Hon Sir Peter Kenilorea, today confirmed at a media Conference that the election date has been proclaimed by the Governor General as Wednesday 4 August 2010 - the ninth National General Election conducted in Solomon Islands since Independence.

The Chairman thanked the media for their support in helping the Electoral Commission to inform people about the election process and their rights and responsibilities leading up to and including election day.

"The Electoral Commission will continue to work with the media and the public to educate people about how to vote, election penalties and other important issues over the next 42 days so that every one is aware of what is right, and what is wrong by the time they reach their polling station on 4 August."

Sir Peter also said that he looked forward to young people getting involved in this election.

"Our aim is a peaceful, free and fair election, and I hope our young people make their services available with integrity and honour."

The Chief Electoral Officer said that proclamation opened the two week period for nomination of candidates.

"Wednesday 7 July is the last day for candidates to provide their completed nomination form and a non-refundable nomination fee of $2,000 to the Returning Officer in the constituency that they wish to stand for."

Eligible candidates must be a citizen of Solomon Islands and be aged 21 years or over and be nominated by three eligible nominators who are registered as a voter in the same constituency as the candidate.

People cannot contest as a candidate if they are:

. under prison sentence of isx months or more
. hold a position with the public service at time of nomination
Includes being employed as a teacher, nurse, provincial government officer or any other government employment.

Returning Officers now have until 29 June to post election notices in the 50 constituencies across the country together with How to Vote awareness materials.