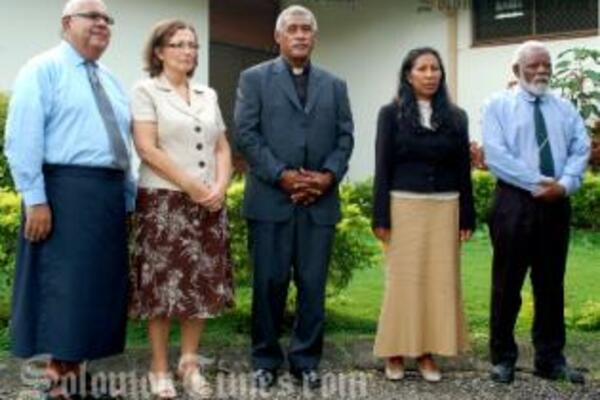 Nine victims from the tensions in Solomon Islands testified before the Truth and Reconciliation Commission, TRC, during the first day of public hearings.

The tragic and disturbing stories told by the nine victims gave an insight into the types of abuses many Solomon Islanders experienced between 1998 and 2003. Among the crimes committed were murder, brutal violence and looting. Hundreds of families had to flee from their homes.

Many giving testimony expressed relief at finally being able to tell their stories publicly.

"This is healing me a lot," Edith Padavisu said after testifying on the brutal assault on her husband in Guadalcanal in April 1999. Ms. Padavisu's husband was attacked by militants with bush knives, spears and guns. He was badly wounded and then left to die. Ms. Padavisu was finally able to help her husband to get to the doctor; he survived the attack, but later died.

Father Samuel Ata, the chair of the Truth and Reconciliation Commission, underlined that the hearing broke a silence that had lasted since the days of the tensions.

"The aim of this public hearing is to put an end to the silence," Father Ata said, noting this is the victims' first chance to tell their stories publicly. "The fact that so many call for their perpetrators to come forward and reconcile is a healthy sign."

During the five-hour hearing, nearly all of the victims called for the perpetrators to come forward to testify, and they also seemed ready to reconcile. Selwyn Kei, the final victim to testify Tuesday, said it this way:

"I am asking you, my perpetrators, to come forward to reconcile with me. Together we can carry our nation forward. May God richly bless us all."

Financial and technical support for the TRC has been provided by a number of contributors, including the Governments of Solomon Islands, Australia and New Zealand; the European Commission; the International Centre for Transitional Justice; the Office of the High Commissioner for Human Rights; and the United Nations Development Programme.

"Today's testimony shows the triumph of the human spirit over adversity," said Mr. Knut Ostby, UN Resident Coordinator and UNDP Resident Representative. "The Solomon Islands TRC has made a good beginning, and will continue to help the nation heal and reconcile."