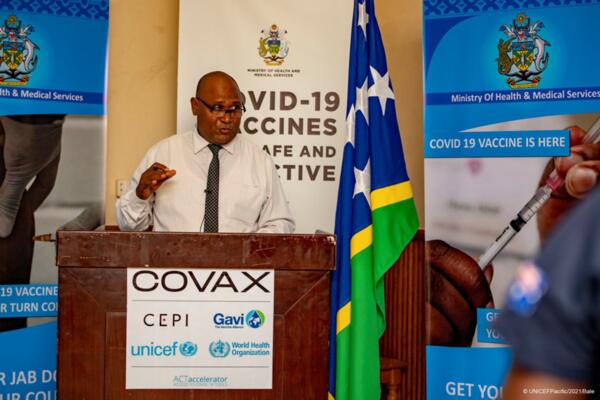 This updated figure was revealed by the Minister of Health and Medical services Dr Culwick Togamana.
Source: File: UNICEF
By Jimmy Nolan
Share
Tuesday, 25 January 2022 07:44 AM

There are a total of 476 positive COVID-19 community transmission cases recorded as of 24th of January 2022.

This updated figure was revealed by the Minister of Health and Medical services Dr Culwick Togamana.

“One third of the people tested have symptoms mainly including fever, cough, sore throat and runny nose. Three patients presented with breathing difficulty last night and they have since been managed,” the Health Minister said.

“Number of people admitted in Central Field Hospital is 32. We also have 6 patients in isolation ward and 14 patients in other wards of the National Referral Hospital. Total patients admitted due to COVID-19 is 52. None of the patients is on oxygen.”

The Health Minister said that most of the positive cases recorded are in Honiara, the epicenter of the outbreak. Some cases are also recorded in parts of Guadalcanal, particularly areas in GPPOL.

He says there are cases now reported in Malaita and Western provinces, with likelihood of numbers rising in the coming days.