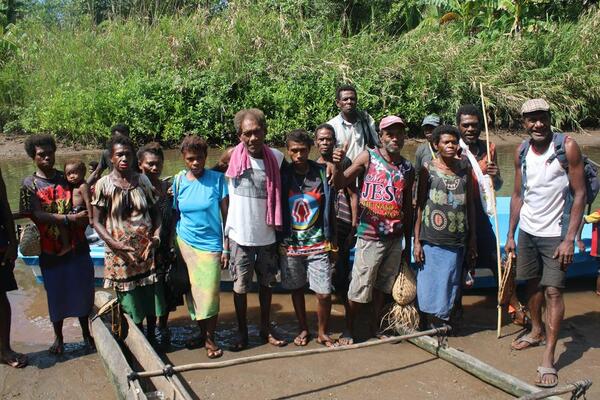 Malefo Anisi (centre in white shirt) with villagers that saved him after 47 days at sea.
Source: Supplied
By Nicole Joannes WNBPG
Share
Wednesday, 31 August 2022 09:36 AM

I was saved by God is the emotional confession from a 58-year-old survivor from Solomon Islands Webster Malefo Anisi who went missing at sea for 47 days.

He left Honiara on July 3rd on a 21 footer powered by a 25 horse power engine for Western Province when he starting drifting in the foggy weather with strong winds and rough seas.

He was using GPS when he left Honiara and passed Guadalcanal and travelled passed Yandina with his GPS still reading and when he passed Merry Island the GPS power went out.

The 58 years old Anisi didn’t reach Western Province at 5pm on Sunday as expected and he realized that he was lost when he did not sight any land by Monday afternoon when his fuel ran out.

He had taken four loaves of bread which lasted him for two weeks while the water in the Esky lasted him a week and a half.

When he had no water to drink he cried out to God to send rain and sure enough rain came and filled his esky.

In the third week when he had nothing at all, he prayed to God asking for Him to send a coconut to come floating to him. And without fail the good God sent him a young fresh coconut as if it had just fallen from the tree which he ate in small portions and that lasted him a week and a half still maintaining its freshness.

He asked the Lord to bless the water to strengthen his body and trusted God to do what seemed best for him.

Anisi sighted land that is Kaskas Island in Amio, Papua New Guinea, on August 18 and when he did he prayed asking God to send strong winds to push his boat toward the shore and God answered accordingly.

When the boat was close to the shore it capsized from the strong winds and huge waves throwing Ainisi into the sea.

In the meantime, two young girls were fishing and saw the incident.

One dived into the sea and rescued Anisi bringing him up to the beach while the other girl went after the boat.

The girl gave him and cooked singapo and while he was eating she followed after the other girl and together they managed to bring the boat to shore. They then alerted their other relatives who came and took care of Anisi and made contact with the Provincial Disaster Office.

Director of Provincial Disaster Wilfred Augustine sent two of his officers to Kaskas to bring him to Kimbe. However, upon seeing Ainis’s condition and knowing that he could not endure a long rough drive he was airlifted by chopper into Kimbe with funding assistance from Director Technical Services Tau Mabone.

Anisi was admitted at the Kimbe Provincial Hospital where he received treatment and has been discharged and is being looked after by the Disaster Office Team.

Anisi will travel to Port Moresby this week and from there fly to Honiara to re-unite with his family.

He has thanked the two angles who came to his rescue and the people of Kaskas and as a token of appreciation he has given the boat to the girl who saved his life.

He has also thanked Mr Augustine and the Disaster Team for their hospitality. Anisi added that he has message for everyone and that is never forget God.