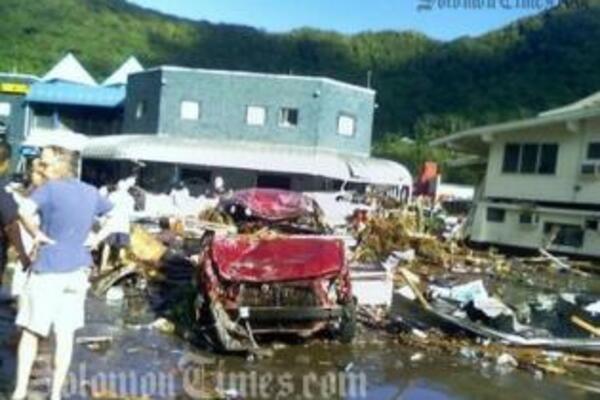 The number of confirmed deaths resulting from the tsunami that swept parts of American Samoa, Samoa and Tonga has increased as reports continue to come in of casualties.

The tsunami, which resulted from an earthquake of about 8.3 magnitude that occurred between American Samoa and Samoa on Tuesday, struck most severely in the two island nations yesterday and caused the Pacific Tsunami Warning Centre to issue a tsunami warning for countries in the region, including New Zealand.
The warning was later called off for most of the nations in the region and while most nations saw slightly larger waves than normal, it was the two Samoas, along with Tonga who bore the brunt with severe damages and loss of lives. The extent of the disaster is currently still being assessed by authorities.

According to Radio New Zealand International, emergency officials in the Samoan capital, Apia, said that 62 people are now confirmed dead and another 142 people are listed as injured.
In American Samoa, the death toll was at least two dozen.

Radio New Zealand International has also reported that details were emerging from Tonga about the effect of the tsunami there with government officials saying that 'at least seven people are confirmed dead on Niuatoputapu and four seriously wounded while there are fears three more people are missing'.

Telecommunication links have been badly affected and the Niua Airport forced to close, meaning a government-chartered airplane sent to monitor the situation could not land on Wednesday.

The government has appealed for donations from people particularly for clothing for people in the Niuas.

There was no reported harm from the disaster to the main island Tongatapu or the Vava'u Group.

Three Australians and a New Zealand child are among those confirmed dead in Samoa.

According to Australia Network News, in American Samoa, 'the earthquake hit as people were preparing for work and school, sparking panic and confusion'.

Then waves as high as two metres began washing in. The capital of American Samoa, Pago Pago was swamped; the road to the airport was destroyed and there've been widespread powercuts. At least 20 people were confirmed dead by Wednesday afternoon, but that number's expected to rise.

In an interview with Russell Hunter, the editor of the Samoa Observer, Australia Network News reports that according to Mr. Hunter, damage reports are still coming in, but the capital, Apia, resembled a ghost town yesterday morning as residents evacuated to higher ground.

Businesses and government offices were closed today, as people concentrated on taking care of their families and neighbours. Mr Hunter says one of his newspaper's senior journalists, Mataafa Keni Lesa, saw the tragedy of the tsunami at first hand when he came across two injured babies while reporting from the field, and tried to get them to a medical centre. They died before they could get attention though. Russell Hunter says the impact of the tsunami is overwhelming the emergency services.

Mr. Hunter also mentioned the difficulty the Samoan government is facing in organizing relief efforts as some of the affected areas are difficult to get to with one of their reporters who was out in the affected area telling him 'that the coastal road is just about gone and he struggled to get through to one of the more affected villages and reports scenes of great tragedy there'.

Meanwhile, according to Australia Network News, Australia and New Zealand have been approached by the Samoa National Disaster Committee for assistance with immediate need for medical assistance, medical supplies and medical personnel as hospitals in Samoa are being overwhelmed by the volume.
The two countries have promised to provide whatever's needed for emergency relief and reconstruction for Samoa and Tonga.

Additionally, according to Australia Network News, US President Barack Obama has declared American Samoa a disaster zone following Wednesday's earthquake and tsunami, and military personnel are bringing in emergency relief.