Solomon Islands to Represent Oceania on World Stage Once Again 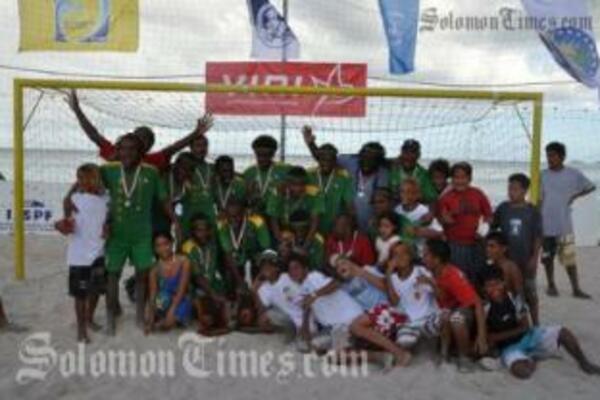 The Solomon Islands have defended their OFC Beach Soccer Championship for the third tournament in a row and have secured World Cup Qualification with a 1-0 win over Vanuatu in the final at Temae Beach, Moorea.

In a extremely close and hard fought final the Bilikiki Boys came away deserved winners after generating more goal scoring opportunities and maintaining their composure and structure through-out.

The Solomon Islands now qualifies as Oceania's sole representative at the Beach Soccer World Cup in Dubai, The United Emirates, on 16-22 November. It will be their third World Cup appearance.

Gibson Hosea Purasi scored from a long range shot in the second period that skidded along the sand and took a wicked bounce, leaping from toe height to shoulder and giving Vanuatu keeper Chikau Mansale no chance. It was a cruel moment for Mansale and a totally unpredictable bounce.

Mansale was otherwise outstanding for his team and made three excellent saves, including one from a penalty taken by James Naka, in the first five minutes.

In turn, Francois Sakama forced an excellent diving save from Timothy Wale at the other end and a follow up save from the rebound - that was to be Vanuatu's best scoring opportunity of the match.

Both teams were struggling with their set-pieces in the gusty conditions and missed a series of direct freekicks in good positions.

Solomon's player Eddie Ngaitin was shown a yellow card and Vanuatu's Francois Sakama also - both for lunging fouls and both in the second period.

The third and final period saw Mansale having to make another fine save in goal early in the piece.

Vanuatu never stopped running and were committed in defence, but despite their best efforts the Solomons gave them only a handful of half chance opportunities to score.

"We having been building up our performance from day one until the final today. This final was a very, very hard game but the boys showed strong spirit to win. Vanuatu really tested us today, but the boys stayed organised and confident through-out and we are now very proud to again go to the World Cup, we will prepare as hard as we can to match-up to our opposition there."

And Koto revealed his team has a new goal for their fourth World Cup appearance in Dubai this November.

Vanuatu captain Seimata Chillia was proud of his team's tournament performance that saw them finish as the only team to win all their group matches.

"We started this tournament on a high with the win over Solomons, then we managed to stay unbeaten until the final and we did our best to beat Solomons again but they were good enough to take it 1-0."

And Chillia was quick to pay credit to the Solomon's tournament performance.

"Good luck to Solomons, they took their chances today, so all the best to them in Dubai. We will go back home and learn some more lessons from this for next time," said Chillia.

Solomon Island's captain James Naka has been named the Championship's Golden Boot winner for his haul of 7 goals and also takes home the Player of the Tournament award.