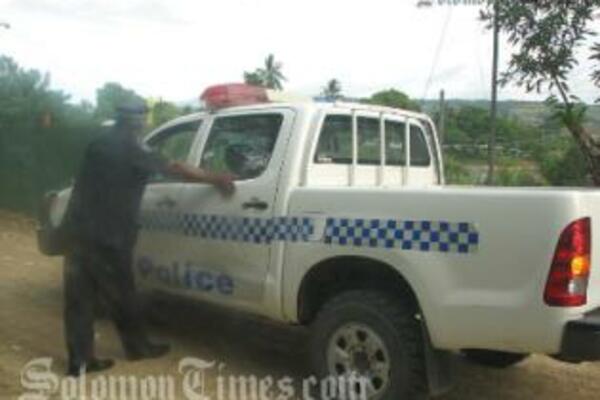 The behaviour of a minority of employees can be of concern ... and the RSIPF is taking a firm approach to disciplinary offences: Commissioner Marshall.
Source: STO Archives
Share
Friday, 17 July 2009 07:00 AM

Disciplinary issues and other offences committed by serving police officers continue to be actively investigated and addressed by the Royal Solomon Islands Police Force.

"Like any large organisation, the behaviour of a minority of employees can be of concern on occasion and the RSIPF is taking a firm approach to disciplinary offences," he said.

"Given the responsibilities of police officers and how their behaviour reflects on everyone within the force, it is crucial we do not tolerate serious incidents or ongoing offences.

"Restoring public confidence in the Royal Solomon Islands Police Force is essential to maintain credibility and respect in the community. It is high time we cleaned up our act and restored the good image of the RSIPF," Commissioner Marshall said.

Commissioner Marshall said it was important that the police and wider community took discipline and corruption seriously and made individuals accountable for their actions.

"It is the responsibility of all sworn police officers to uphold high standards, and particular crucial from those in leadership roles who have strong influence over others," he said.

"We are all human and make mistakes or misjudgements. Life under close public scrutiny is never easy. But the people of the Solomon Islands deserve a police force they can trust."

"As Commissioner of Police I am only interested in evidentially based investigations - not rumours and innuendo. Our employees are given fair hearing during the course of disciplinary proceedings and they have an opportunity to respond to complaints before decisions impacting on their future are made.

"This is why significant matters of concern are referred to their senior officers, the RSIPF Executive and the PSII for further action and investigation where appropriate," he said.

"Individual cases and circumstances sometimes warrant different penalties. However all such internal disciplinary matters are being pursued firmly, fairly and without any ethnic bias."

Commissioner Marshall said that since his appointment to the RSIPF he had recommended the termination of employment of 10 police officers.

Criminal charges against some of these former officers have also referred for prosecution through the courts.

Other penalties used for internal disciplinary offences have also been enforced. These include demotion, forced transfer to other duties, fines, withholding pay and loss of privileges such as allowances, police housing and vehicles.

"Most of these cases have related to continued non-performance of police duties, behaviour which prejudices good order and discipline, corrupt conduct, continued absence without leave, refusal to follow orders or police procedures, and in some cases criminal charges," he said.

"Decisions to dismiss offending police officers are taken in the best interests of the RSIPF. All recommendations to demote or terminate senior ranked officers are referred to the Police and Prison Services Commission for final approval."

"The officer concerned is still suspended following recent disciplinary hearings. The tribunal report is now expected for my consideration and decision," he said

"Chief Superintendent Ratu will then be given an opportunity to make a submission, regarding outcomes of his hearing and my decision."

Commissioner Marshall said that another serious disciplinary case involving a veteran police officer of 30 years' service has resulted in the Sergeant from Honiara Central Police Station being dismissed this week.

"This follows a dubious track record of absenteeism from duty and failure to perform - with repeated offences over 20 years."

Another long-serving Sergeant is likely to receive a similar penalty for similar breaches, he said.

"However I do wish to emphasise that these cases do not truly represent the commitment, professionalism, pride and dedication daily shown by the vast majority of the RSIPF," he said.

"Overall, I am increasingly impressed by the work ethic demonstrated by the RSIPF."

"They and the new recruits now being trained as the next generation of police officers understand that the highest standards must be lived for the RSIPF to earn the respect and support of the people and the government of the Solomon Islands."