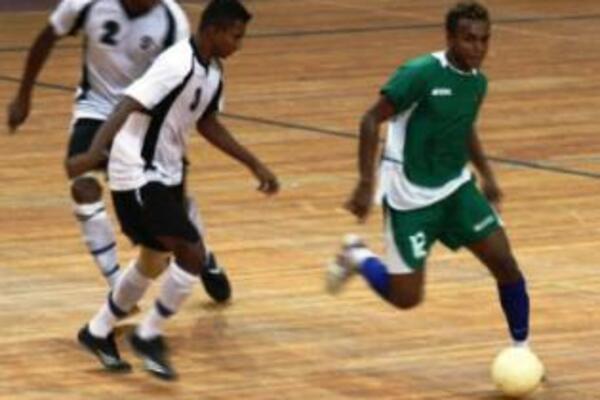 The Solomon Islands have defended their Oceania Futsal title with an 8-1 win over host nation Fiji in the final at the OFC Championship in Suva [last night].

It was another goal fest for the Solomons who took their over-all tournament ledger to 32 goals scored, seven goals conceded in four matches.

Micah Lea'alafa sealed his status as the championship's Golden Boot winner by scoring two goals in the final to take his haul to nine goals, two ahead of nearest rival - and teammate - Jack Wetney who also scored a pair in the final.

Wetney still left the arena with his fair share of the accolades, winning the Tournament's Golden Ball award (Player of the tournament).

Solomons captain Elliot Ragomo was clearly just as elated to have defended his team's OFC Futsal title as he was when his team won it for the first time last year.

"I am so proud of the boys that we came back and defended our title and we really deserved to win this because we shook off some rust after our first game and we have played better and smarter each game since."

"Now we have to look forward to the (invitational) tournament in Libya later this year and continue to lift our game. It's another big step forward for us and we are proud to be Futsal ambassadors for the Pacific."

"I just want to thank all our supporters here in Fiji and at home and all our families and I think we will continue to grow this game and one day we will make a statement to the rest of the world about what Oceania can do," Ragomo said.

It was Lea'alafa who opened the goal scoring account for his team on six minutes with a powerful shot that deflected off of a Fijian defender and bamboozled the unsighted Simione Moce Tamanisau.

On 11 minutes, a clever long chip pass from James Egeta found teammate Jenan Kapu unmarked and he side stepped the onrushing Tamanisau and walked the ball into the Fijian net.

Just shy of the quarter hour Ragomo set-up Wetney for a simple finish after a weaving run down the sideline.

On 17 minutes, Tamanisau had a measure of revenge with an audacious long range chip shot from just outside his own circle that caught his opposite, Solomon goalkeeper Alick Lioka, well off his line.

But it was a brief respite for Fiji as the Kurukuru continued to soar; Fiji's sixth foul gave Ragomo the chance to score from an unopposed free kick and he made no mistake. On 19 minutes, another foul and free kick saw the Solomons reach 5-1.

The second half didn't get any easier for Fiji as they lost Aisea Dauivalu Codro to a red card for a deliberate handball inside his defensive circle. James Egeta stepped up to score his first of the match.

Fiji defended with desperate intensity for the remainder of the match but were unable to prevent a further two goals to Wetney and Lea'alafa.