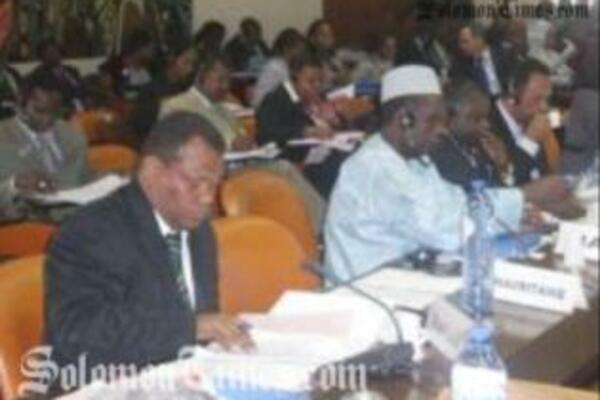 Abana: More effort should focus on poor and vulnerable countries that are the real victims of the crisis.
Source: Photo Supplied
Share
Monday, 06 July 2009 08:00 AM

Minister of Planning and Aid Coordination, Hon. Steve Abana, highlighted on the need for urgent solutions to be put in place to avoid such crisis re-occurring in the future.

Mr. Abana made the comment in addressing the United Nations High-level Conference on the Global Financial and Economic Crisis and its impact on Development held in New York last week.

Speaking on behalf of the African, Caribbean and Pacific (ACP) Group, Mr. Abana said that ACP states are amongst those hard hit by the crisis and want solutions to focus on countering the effects of the crisis.

Since the crisis started, ACP states have experienced major falls in their export earnings; foreign direct investment has slowed down, official development aid declined and remittance flows have shrunken.

Mr. Abana stated that the crisis poses a severe threat to its members, compromising not only the efforts and economic gains achieved over the past years, but also the attainment of the Millennium Development Goals (MDGs).

The ACP Group underscores that the impact of the crisis would undoubtedly exert strong pressure on the macro-economic balance of the ACP countries.

Mr. Abana said that the statistics were equally alarming from one country to another and projected that some of its members posting negative economic growth would fall into recession in 2009.

In urging the global community to act, Mr Abana suggested that more effort should focus on poor and vulnerable countries that are the real victims of the crisis.

He acknowledged that the poor countries are more than ever in need of funds to compensate for the decline in national revenues, and to drive investments in view of maintaining and boosting growth.

ACP states have made efforts at the national and international levels to address the crisis.

At the national level, said Mr Abana, many ACP countries have implemented various measures aimed at mitigating the effects of the crisis but cautioned that with limited room to maneouvre, governments had insufficient reaction capacity and desperately needed additional resources.

At the international level, the ACP welcomes various initiatives and decisions taken by the G20 in London in April, the European Commission's declaration in the same month to provide aid to developing countries, and the UN high-level conference on the crisis to be held in New York from 24 - 26 June 2009.