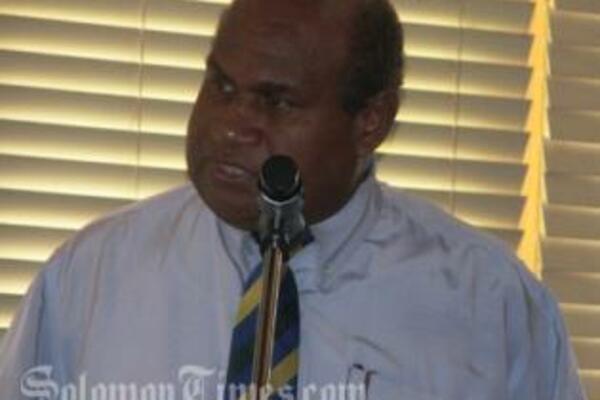 "It is important as the Government that we assume the driver's seat so that together with RAMSI we can help our people to live normal lives," Mr Fono told local journalists attending the workshop.
Source: Photo Supplied
Share
Friday, 03 July 2009 07:14 AM

The Solomon Islands Government (SIG) is taking the lead in steering the Regional Assistance Mission to Solomon Islands (RAMSI) as the two parties pursue agreed areas of assistance through the recently developed SIG - RAMSI Partnership Framework.

Deputy Prime Minister Fred Fono said the Solomon Islands Government is in the 'driver's seat' and is working with RAMSI to take the country forward.

Mr Fono was speaking at a joint SIG-RAMSI briefing held on Wednesday for the local media aimed at helping them understand the purpose and goals of the partnership framework which has been jointly developed by SIG and RAMSI.

"It is important as the Government that we assume the driver's seat so that together with RAMSI we can help our people to live normal lives," Mr Fono told local journalists attending the workshop.

RAMSI Deputy Special Coordinator, Justin Fepulea'I, said the Partnership Framework sets out in a single document the goals and objectives as well as the detailed plans for the areas in which it has been agreed that RAMSI will work with SIG over the coming years.

"It is consistent with both RAMSI's mandate and the Government's own priorities for the development of Solomon Islands", he said. "The Partnership Framework provides the foundation for the continued development of a strong and effective relationship between SIG and RAMSI," he said.

Special Secretary to the Prime Minister, John Keniapisia, urged the media to think of the framework as the Government's 'work plan' for RAMSI's activities in Solomon Islands.
"A good example of how RAMSI is supporting SIG-led efforts is in the area of anti-corruption, one of the issues identified in the Partnership Framework as cutting across all areas of RAMSI's work," he said.

"The Government is driving the anti-corruption agenda that is set out in the Partnership Framework but RAMSI is providing us with the support to implement our priorities," he said.

Mr Keniapisia highlighted the current development of the government's anti-corruption policy through a special anti-corruption taskforce that was established earlier this year with RAMSI's assistance.

"This is a good example of how SIG and RAMSI can work together to implement the Government's policies and fulfill RAMSI's mandate."

Other cross-cutting areas of RAMSI's work identified in the framework are gender and capacity development.

The Framework also provides for SIG and RAMSI to assess and measure progress jointly by identifying targets and indicating likely timelines for these activities in many cases.

The Partnership Framework is expected to be tabled in this session of parliament before being considered for endorsement by the Pacific Islands Forum Leaders' meeting in August.