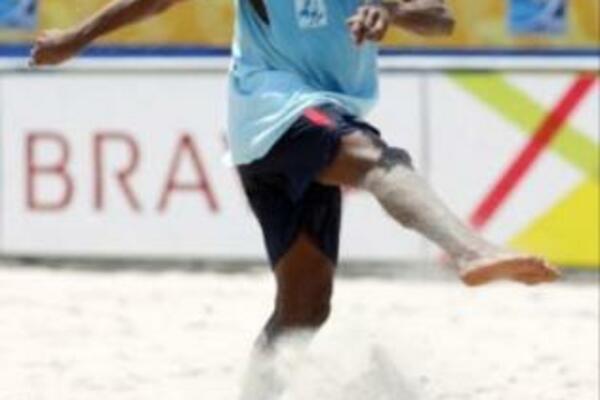 Bilikiki boasts some of the more experienced beach soccer players in the region with the team attending all of the past 3 FIFA Beach Soccer World Cups since 2006.
Source: Photo Supplied
Share
Tuesday, 30 June 2009 07:29 AM

The Vanuatu National Beach Soccer Team, en-route to Tahiti for the Oceania Qualifying Tournament has requested a 10 day stop-over period in Honiara for some friendly warm-up matches with local clubs and the Bilikiki Boys.

Solomon Islands Football Federation has accepted their request and has informed the Honiara Beach Soccer Committee and its beach soccer commercial partner, DJ Graphics Ltd about the tour.

It is understood that this will be the first ever international beach soccer match in Solomon Islands and DC Park is now under-going some face-lifting in preparation for the matches. It is also an important opportunity for the Bilikiki team as they warm up for the qualifiers in Tahiti. Solomon's Bilikiki National Team is currently the region's Champion having represented Oceania in the Beach Soccer World Cup since 2006 when it first entered.

Chairman of the Honiara Beach Soccer Committee, Mr. Nelson Boso welcomed the tour saying that with only just a year since its inception, the Honiara Beach Soccer league is now being treated with an international match thanks to neighboring Vanuatu. He said that he had assured the public along with families and friends of football that beach soccer has a place in Solomon Islands and that it could become the fastest growing sport here.

"We are well aware of the limitation and difficulties of our current organization and especially our facilities, but I believe we have a great local organizing committee in SIFF and hopefully the pitch is just adequate for a friendly match, and our boys are passionate and have the urge to give our visitors a good warm-up series," said Boso. "I am told that Vanuatu is a very good side and they have better facilities than us here, so certainly they will be an important yardstick for us and our future development."

Bilikiki boasts some of the most experienced beach soccer players in the region with the team attending all of the past 3 FIFA Beach Soccer World Cups since 2006. Bilikiki captain James Naka ranks among the best players in the world. Bilikiki has also recruited some youngsters for this year's team and this may be their first taste of international beach soccer and also an opportunity for locals to see some up and coming heroes of this exciting football code. Robert Laua of Popi Beach Soccer club is already making a name for himself in the Honiara league and he may be a key player against the touring Vanuatu side.