The Plastics "Out There" and "In Here" 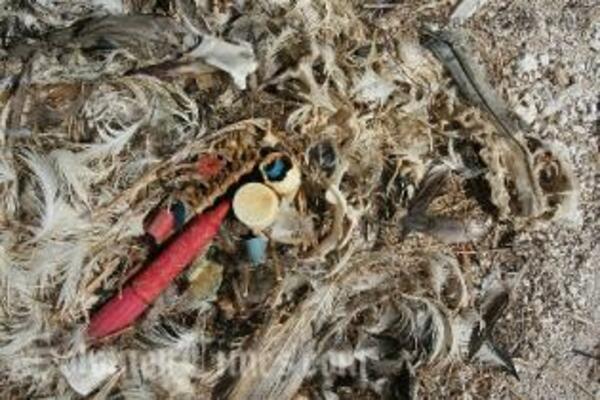 This Laysan Albatross chick has been accidentally fed plastic by its parents and died as a result.
Source: www.wikipedia.org
Share
Wednesday, 17 June 2009 09:16 AM

An article by Wallace J. Nichols that appeared in the Huffington Post about the Great Pacific Garbage Patch, a large area of rubbish, mostly plastic, that is posing a great threat to marine life.

There's a patch of ocean out there about as far as you can get from people on this small blue marble we call Earth, and it is slowly filling with tiny flecks of plastic.

First, they said it was a "large area" the size of Texas. Then it was two Texases. Then, a continent. They said the plastic fragments outnumbered plankton, then later that there was six times, and then seven, and now thirty times as much plastic as plankton. They call it the Great Pacific Garbage Patch, the Trash Island, The North Pacific Gyre, or the Pacific Trash Vortex. It's described as an oceanic trash dump, a giant bowl of plastic soup, a place where sea turtles and albatrosses fill their stomachs with lighters and bottle caps.

I know of a half-dozen expeditions now mounting or planned to visit this heart of the plastic problem... "out there." But, here's what else I know: they don't need to go "out there" to see the problem, because the problem is "in here," too.

And over there, where you are.

It's in the Sargasso Sea and the Mediterranean. It's in our lakes and rivers. It's on remote sea turtle beaches in the South Pacific. It's in your kitchen. And, it's in your blood.

Scientists have known that tiny pieces of plastic pose an ominous threat to life in the ocean, and to us, since 1972. New toxicological research is making it increasingly clear that our century-long love affair with plastic is taking its toll "in here." Chemicals such as phthalates and Bisphenol A leach from plastic containers into the food or liquid inside and, from there, into our bodies. Once inside us they can poison us or cause cancer, neurological damage, endometriosis and birth defects, as well as liver and kidney damage. Other chemicals like PCBs, DDT and PAHs cling to the plastic bits and work their way up the food chain, and eventually back to us.

Yet plastic production and pollution has only soared. Maybe you've heard the stats? A trillion plastic bags are used each year, most discarded after a single use. Billions upon billions of plastic bottles, cups, utensils and straws pile on top of them. Then there are all the containers that virtually everything comes in: the plastic we wrap things in, and the myriad little toys, trinkets, clips and holders that do one thing and are then tossed. Not to mention the merely useful items like cell phones, cassette tapes, CD's and laptops that were once cool enough to be kept for awhile, but are now obsolete garbage.

Cigarette butts, the most common item removed from our beaches by the folks who spend their free time doing such saintly things, are mostly plastic. Discarded fishing gear, nets, ropes and glow sticks are plastic, too. Such items create a particularly insidious problem as they float along for years, "ghost fishing" for anything unlucky enough to get tangled in their sprawling web.

In many parts of the world, disposable plastic is a recent phenomenon. As a field biologist I witnessed the introduction and growth of plastic in Mexican and Indonesian coastal communities -- places without regular garbage disposal let alone recycling programs. Before plastic, aluminum and glass containers were returnable for a deposit, nearly everything else was biodegradable or burnable. Along came plastic and you know the rest.

Don't get me wrong, addressing the distant patch of plastic in the ocean is noble and important, but the first step to fixing things "out there" is to get a grip on the plastic "in here" at arm's reach.

Now, here's the good news. A large percentage of the plastic cleaned up on our beaches and from our oceans is avoidable. There are alternative, reusable or biodegradable substitutes available now, with today's technology. I'm not talking about ten years from now or some sci-fi version of a plastic-free future. I'm talking about today. A huge percentage of our plastic problem could be addressed immediately, using simple, cost-effective, off-the-shelf technologies. All we need is the personal and political will to say "no" to disposable plastic wherever and whenever there's a better alternative.

* See if you can go ONE day without using disposable plastic. Email me if you need helpful tips. If you can go a day, you can go a week.
* Once you've done that, challenge another person to do the same, and help each other by lending your reusable bag, sending reminders and encouragement, or gently applying peer pressure.
* Then add your voice to the growing chorus of thousands of communities, cities, workplaces, and schools who are striving to drastically reduce their waste streams.

There is a solution to all the plastic swirling "out there" in the Pacific Ocean. It begins and ends "in here" -- inside me and inside you.