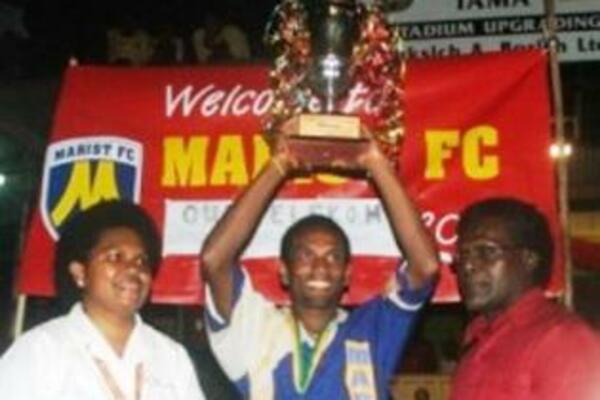 Marist can now look forward to competing against the best clubs in Oceania when the 2010 O-League gets underway in October, 2009.
Source: Photo Supplied
Share
Thursday, 11 June 2009 09:11 AM

The unfancied Marist club have defied the odds by beating defending champions Koloale FC 1-0 in the 2009 Our Telekom National Club Championships final last night to earn a spot at the 2010 O-League.

With over 10,000 fans enjoying the action at Honiara's Lawson Tama Stadium, Michael Patiti's 79th minute was enough to seal victory for Marist, who have not been club champions since 2006 when they represented the Solomon Islands at the Oceania Football Confederation Club Championships (now the O-League).

Koloale coach Luke Eroi's hopes of repeating last year's triumph started to fade in the 34th minute when striker Ezra Sale was shown a red card for a challenge on the Marist goalkeeper, who also left the field with a suspected jaw injury.

Eroi's side had come out firing from the kick off and enjoyed a host of early chances against the nervous looking Marist side. Koloale's Henry Fa'arodo, who was later named player of the tournament, was a constant threat. But once they were reduced to 10 men, it was always going to be difficult for Koloale.

With an evenly contested second half it looked like the match was heading to extra time, but Marist delivered the heartbreaking blow to Koloale in the 79th minute when substitute Michael Patiti headed home from an Abraham Iniga cross, sending most of the crowd into rapture.

Iniga was impressive throughout the final and was awarded the Golden Boot award after the match for his 10 goals in the tournament.

Marist settled after scoring the goal and there was no way back for Koloale. Eroi made two late substitutions but without any success.

Nicholas Muri went close when he volleyed on target but the Marist keeper made an outstanding reaction save.

Marist can now look forward to competing against the best clubs in Oceania when the 2010 O-League gets underway in October, 2009.