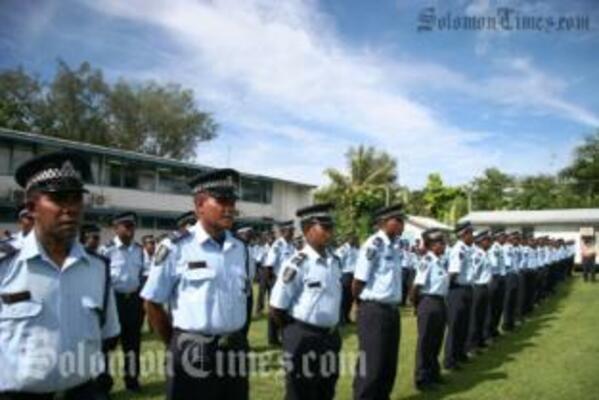 Solomon Islands Minister of Police, James Tora, thanked Mr McDermott for the leadership, hard work but most of all his approach to dealing with the difficult task of helping to rebuild the RSIPF.
Source: STO Archives
Share
Tuesday, 09 June 2009 09:27 AM

After two years heading RAMSI's Participating Police Force (PPF) and as Deputy Commissioner of the Royal Solomon Island Police Force (RSIPF), Commander Denis McDermott was given a warm farewell at a formal ceremony at the Rove Police Parade Ground in Honiara last Thursday.

Addressing the parade which was attended by hundreds of representatives from the Solomon Islands Government, the RSIPF, and RAMSI, the Commander called on the RSIPF to play their role in rebuilding their nation.

"I am humbled by your parade today and it will forever remain in my heart as it symbolizes not only what policing and discipline is all about but just how far we've come on this journey of renewal.

"I want more than anything to see you apply this same standard to all you do: respect for the community; your attendance at work and certainly to do what is required in enforcing the law in a very positive and fair way so that the community will grow to trust you once again."

Commander McDermott said an effective police force would create the stable environment Solomon Islands needs for the social change required for the nation to grow and mature and move forward in a positive way. "The RSIPF can be a credit to the citizens of this nation if you continue to work with pride, integrity and loyalty to your oath of office in line with your Constitution," he said.

Solomon Islands Minister of Police, James Tora, thanked Mr McDermott for the leadership, hard work but most of all his approach to dealing with the difficult task of helping to rebuild the RSIPF.

"Denis McDermott has shown that he is a man who can take action and clearly explain why he will take those actions but he also knows when it is time to step back and let the Solomon Islanders take the lead.

"Probably the best part of Denis McDermott's time in Solomon Islands is that he cares for the people, he cares for all the members of the RSIPF and he cares for our country," Mr Tora said.

RSIPF Commissioner, Peter Marshall, honored Commander McDermott for his commitment and dedication to improving the capacity of the RSIPF during his time in the Solomon Islands.

"He is a man who is very well regarded by the RSIPF both as a police officer and as a person who has won the hearts and minds of the members within the organisation. He is going to be missed and has made a significant contribution to the future of the Solomon Islands," Commissioner Marshall said.
Commander McDermott had special words of praise for the 15 member countries of the PPF, saying that policing initiative was a significant cause for positive change in the Solomon Islands.

"It's been one of the proudest times in my policing career to see the 15 nations come together to help their neighbours here in the Solomon Islands. It is a remarkable achievement from every perspective," he said.

Commander McDermott also wished the new PPF Commander, Wayne Buchhorn, the same enjoyable times he had had and said that he trusted in due course and with ongoing support, he would also achieve the same level of satisfaction that he had enjoyed in helping to rebuild this force and this nation.

Commander McDermott will return to Australia with his wife Beth and enjoy his well earned retirement - again.