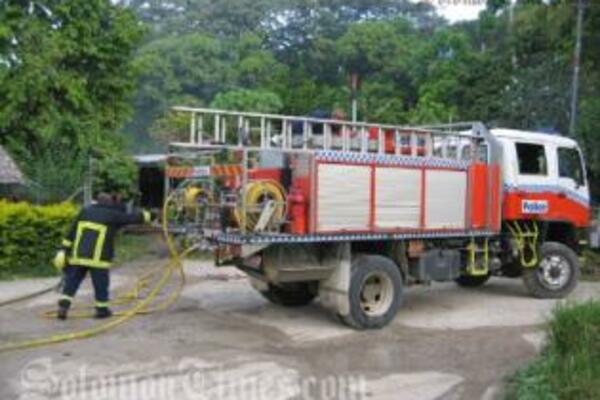 Inspector Rodney Kuma of RSIPF Fire Services said their prompt radio dispatch meant a fire truck and four crew were able to arrive at the scene in Central Honiara within five minutes.
Source: Photo Supplied
Share
Friday, 29 May 2009 09:32 AM

Officers manning the Police Communications Centre received an emergency call from a staff member of the YWCA hostel at 4.40pm.

Inspector Rodney Kuma of RSIPF Fire Services said their prompt radio dispatch meant a fire truck and four crew were able to arrive at the scene in Central Honiara within five minutes.

"When we arrived the building was already well alight but the structure was still standing," he said. "Fortunately no children or staffs were in the kindy at the time so we had no casualties and could focus on controlling the fire quickly."

"Damage in the ceiling above the office where the fire started has the worst damage. The building is partially destroyed with smoke and heat damage but it is repairable," he said.

Inspector Kuma said his fire-fighters were able to stop the blaze from spreading to the two-storey YWCA hostel next door.

"Our investigations into the cause of the fire are continuing but at this stage there is nothing to indicate anything suspicious. We will complete our report over the coming week."

Inspector Kuma said he was happy with the success of yesterday's fire fighting effort at the YWCA site.