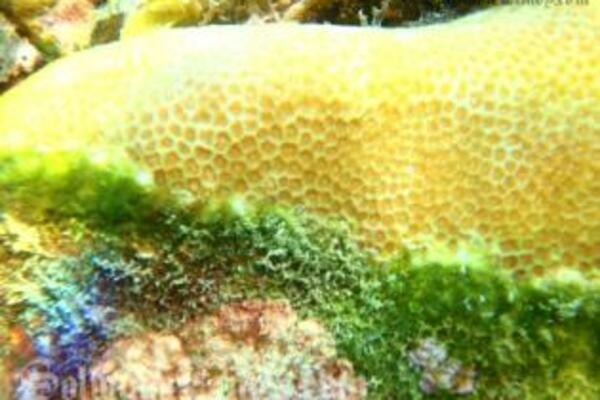 World Wildlife Fund and recent Indonesia CTI conference effort must focus on sanitation and proper sewage treatment to overcome nutrient pollution that is feeding algae that in turn is suffocating coral polyps.

Raw sewage is categorically being dumped in uncontrolled and unprecedented quantity into ocean food web nursery waters. Human sewage nutrients are adding to natural nutrient load, the total sometimes forming destructive nutrient pollution. Nutrients are bonded to fresh water that as fresher salt water is being transported in streaming patches within wind-driven ocean surface current. Coastal alongshore current is concentrating and streaming the dumped nutrients over vast distance to other waters, then sometimes nation to nation. Streams and clouds of fresher water with bonded nutrients in the ocean are travelling similar to how moisture clings together in streaks and patches of clouds blown by wind in the sky. The nutrients, like rain, are not always a problem. When heavily polluted fresher salt water saturates an area the over-supply of nutrients feeds and proliferate algae that smothers and kills coral and seagrass food web nursery.

Whole reefs are being smothered with invasive algae killing numerous corals in a single event. Nutrient pollution is also killing individual coral amongst healthy coral that survives until more pollution arrives. New coral sometimes grows in previously devastated areas. Destructive algae growth appears to switch on and off according to nutrient load presence.

Alga thrives in warm water. Without knowledge of nutrient pollution, some scientists see coral bleaching or whitening a result of global warming.

News about coral thriving in one area can be confusing but explained by understanding different water currents, natural nutrient runoff and human population density locations. Coral generally worldwide is not thriving. An estimated 80% of coral has already been lost from the Caribbean, 40% in the 'triangle', and considerable remaining coral looks very sick.

For some unexplained reason the Coral Sea and Great Barrier Reef and damage there is not included in the CTI. Australian interim conservation status for the GBR is not enough. There is need for whole-of-ecosystem science and solutions. Triangles involve geometry, not biology. Politics involves lack of common sense however the CTI is a brilliant initiative.

SW Pacific 2009 photographic evidence clearly shows algae in a green line between dead and healthy coral (photo attached). When algae moves further into live polyps or dies, bacteria takes over until only lime skeleton remains. Photographs of algae on coral need to be closely examined like a doctor examines an x-ray. Close examination shows green or red algae or bacteria or dead coral where healthy polyps with zooanthellae alga should live. Invasive algae appears to smother and quickly suffocate the essential zooanthellae algae that feeds the coral building animal.

Nutrient pollution is also proliferating algae and epiphyte growth that is smothering absolutely vital estuary and bay and lagoon seagrass on which baitfish and other ocean animals depend. Older people can indicate where seagrass no longer exists amongst mangroves and in bays. Once thriving long seagrass habitat area is now just mud. Seagrass generally is devastated. Seagrass and the devastation and baitfish have been virtually ignored however some studies in the Mediterranean have indicated 400 square meters of seagrass can support 2,000 tonnes of fish annually. Some 'seagrass watching' is now occurring but the science is years behind. Seagrass often depends on coral for sheltered lagoon habitat.

Baitfish are seagrass dependent. Baitfish catches for indigenous islander staple food consumption and for commercial fishing bait have not been measured, recorded or managed. Baitfish are vitally important but do not even appear on government agency fish species posters. Knowledge is essential but relevant resources are lacking.

Seagrass and coral is naturally rare considering size of the entire world ocean. Seagrass is found only in estuaries bays and lagoons. Seagrass is absolutely important like lining in a womb supplying a placenta to feed life. Pilchards, herring, anchovies and other baitfish including some squid depend on seagrass. Seagrass is the nursery for post-larval baitfish. Tuna and even baleen plankton-feeding whales and other ocean animals depend on baitfish. Unprecedented mass starvation of seabirds has been occurring. Evidence indicates some whale stranding may be due to primary starvation, weakness, a mammal's fear of drowning and instinct to find shallower water. Only one or a few may be weak but panic and cry brings in the pod.

In Solomon Islands there has been a recent 69% increase in maternal mortality and the modern day increase coincides with development of traditional fish staple depletion and impact including chronic poverty, malnutrition and anaemia. Many people who used to eat free fresh fish 3 times daily every day if desired, now eat fish only 3-4 times monthly. Many people worldwide can no longer afford fish. Cost of fish has increased due to depletion. Fish depletion is an unacknowledged cause of inflation worldwide.

Empirical fact evidence indicates traditional available fish resource devastation in Solomon Islands has resulted in fundamental collapse of subsistence barter trade leading to anger, argument, fights, recrimination, civil unrest, coup and riot. Fiji political problems are linked to fish depletion and associated poverty. Fish devastation-linked malnutrition amongst river and coastal people in PNG, Philippines and throughout Asia Pacific islands has consequences that burden people and government. Amongst it all, Solomon Islands is one of only two nations with the most diverse marine species that even form a last natural ecotourism attraction of the world.

The United Nations must embrace education about the whole marine environment and associated economics of world food supply solutions, including worldwide sanitation and proper sewage treatment.

Dynamite and logging and 'overfishing' are not the problem because when these activities stop the fish stocks do not usually recover. American Indian Billy Frank Jr knows well about importance of water habitat, his non scientific but indigenous insistence helping recovery of north Pacific salmon. This man could inspire sustainability of SI and world ocean fisheries.

Priority of problems and solutions must be urgently assessed. CO2 aggravated global warming is not the cause of coral or seagrass or fish devastation and History must never record otherwise. The Hokkaido herring fishery collapsed by the early 1920's and the Californian sardine fishery finished by 1962.

Coral devastation must be urgently seen as a symptom of catastrophe involving entire ocean food devastation that must be reversed immediately to prevent protein famine and disease and unrest and war. Consequence of food and land shortage is known.