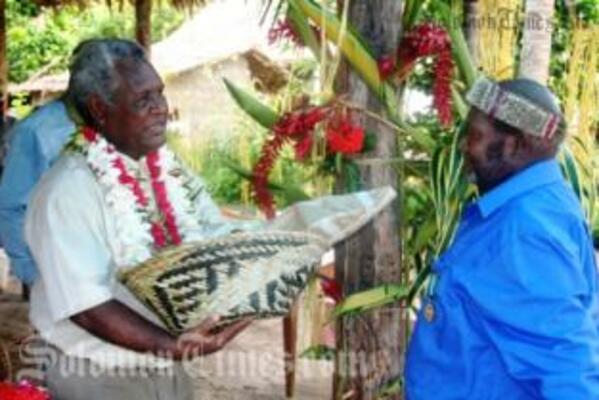 Fishermen in the Sandfly and Buenavesta region openly expressed their misery on this issue when meeting with the Governor General Sir Nathaniel Waena at Olevuga Village last week.
Source: Photo Supplied
Share
Tuesday, 26 May 2009 09:00 AM

Communities on Gela Islands in the Central Islands Province are demanding answers from responsible government authorities after their fishing project applications were unsuccessful.

Community leaders and fishermen in the Sandfly and Buenavesta region openly expressed their misery on this issue when meeting with the Governor General Sir Nathaniel Waena at Olevuga Village last week.

Provincial Assembly Member for Sandfly and Buenavesta, Patterson Mae said it is very sad that government authorities have neglected rural Gela fishermen, whose seas and reefs are rich in fish and other marine products.

Mr Mae said applications from Central Islands Province for fishing projects administered by the Ministry of Fisheries in 2008 all failed without any explanation.
He added that previous 10 fishing projects approved in 2007 for the province have never reached the applicants ever since.

"It's a sad situation for our people," he said. "Government authorities must understand that Central Province is the biggest supplier of fish and marine products to the Honiara Market over the years due to our rich fishing grounds and close proximity to the capital."

"This situation is a huge setback for the improvement of the lives of our cash strapped rural people."

Fisheries is the main income earner for the majority of families in the Gela Islands, particularly, the less agricultural regions of Sandfly and Buenavesta, where suitable agricultural land is limited.

In 1997, when the now defunct Semege Fisheries Center was in operation, the region produced a total of 82,000 kg of fish from Sandfly and Buenavesta fishermen compared to other fisheries centers around the province that year which was below 1,000 kg.

"During those days, families were able to send all their children to school, but, not now," Mr Mae said.

He said the figures have shown that fishermen from the area are the best in the province and yet responsible authorities failed to recognize their application for government assistance.

Mr Mae called on the government to find ways to revive the former Semege Fisheries Center if rural development is to be implemented.