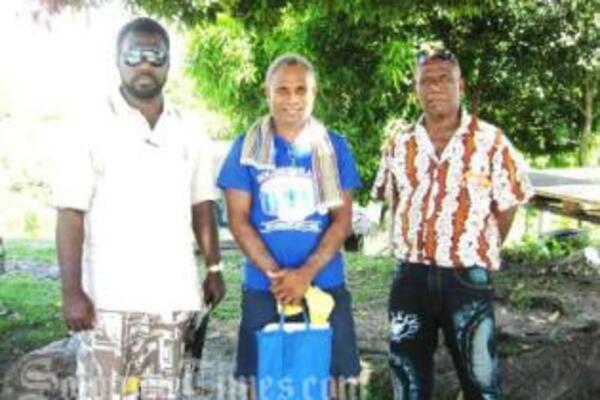 Desperate is the best word to describe the current situation at Bulu, a small community in south Malaita. During freak storms in early April, more than two hundred homes were flattened.

Desperate because they cannot wait another month, most that lost their homes are still struggling to rebuild them. The hope they have is from the government and given the tight economic situation, as the government has already advised through a statement last week, there is no other option.

However, for the Bulu communities, there is another option, self-help. And that's what they have done. They quickly formed a Disaster Committee that visited Honiara to seek help from private businesses and the public.

Committee Chairman Smith Ragi, Secretary Beven A'iele and Honiara Committee member Reginald Ngati say the move they have taken is necessary after they have learnt about the economic problems the government is having.

"We were hoping to get quick support but since the government is having problems, we are resorting to doing things ourselves to get our communities out of the hardships they're still in following the freak winds last month. We understand the situation of the government. But we also have hardships back home and our people are desperate. It is based on these two contrasting scenarios that we have decided to do this: do something ourselves rather than add more pressure on the government in order to bring quick normalcy for our people," said Mr Ragi.

Committee Secretary A'iele said they will be going around with an appeal letter for building support in kind - such things as building materials, petrol and oil for chainsaws and nails.

"We know about the current global economic problems. But we also know that there are Christians out there who could support with what little they may have. We are not asking for thousands but whatever little gift private companies and individuals in Honiara can give with a good heart - that would add up. Anything at all would be much appreciated," he said.

Pastor A'iele also said the committee will be showing video footages of the devastations on south Malaita in SDA and SSEC churches in and around Honiara this week and next week.

The Chairman and Secretary also added that the communities' contributions would be providing trees, chainsaws and operators, sand, water and workers.

"We do not want to make our people feel like beggars. No, we want them to be contributors - partners with whatever companies or individuals that will support us," said Mr Ragi.

Mr Ragi and Pastor A'iele said they will be going around Honiara starting today to seek possible support from business houses, corporate companies and individuals.