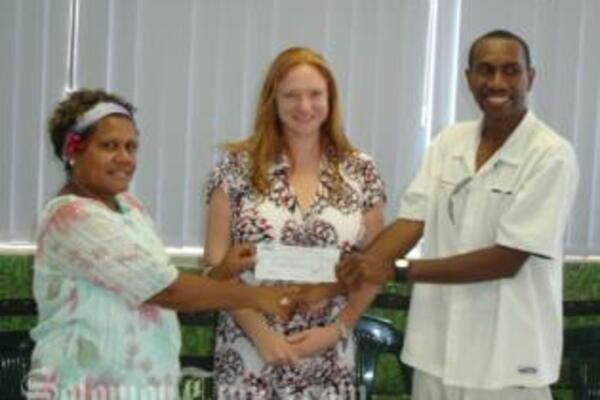 The Australian High Commission today announced its support for 2009 SOLO ICON, at a handover ceremony held at the Ministry of Women, Youth and Children, where Deputy High Commissioner, Alison Duncan, handed over a cheque for SBD30, 000 to Global Youth Leadership Nexus.

Ms Duncan said, "Australia is pleased to be able to support Solo Idol again in 2009, this year under the new name SOLO ICON."

Hayley's involvement took Solo Idol to a completely new level. Hayley worked with the contestants in the week leading up to the grand final to increase the quality of their performances and build confidence in their own abilities. The 2008 Solo Idol Grand Final was a huge event, which the Australian High Commission was proud to be a part of.

"I am excited to announce that, this year, the Australian High Commission has organised for Australian music producer, Kelvin Fahey, the President of Hardrush Music to come to Honiara in the lead up to the 2009 SOLO ICON Grand Final," said one of the local organizers, Charles Ratu.

Kelvin Fahey will visit Solomon Islands from 13 to 18 August, to work with finalists on song writing and marketing.

The winner of this year's SOLO ICON Grand Final will be offered a recording contract with Mr Fahey and Hardrush Music.

Pacific Blue will provide return airfares for the winner to Brisbane, Australia, to allow the 2009 SOLO ICON winner to spend two days at Woodhead Studios recording a CD single, which will then be distributed in Australia and in Solomon Islands.

This is a huge opportunity to put Solomon Islands music on a world stage.

The Australian High Commission, in a press statement, said that it is proud to be able to work with the Ministry of Women, Youth and Children and the Global Youth Leadership Nexus to support young aspiring Solomon Islands artists. Organizers are encouraging everyone to get involved and get behind this year's competition as it is going to be the biggest and best ever.