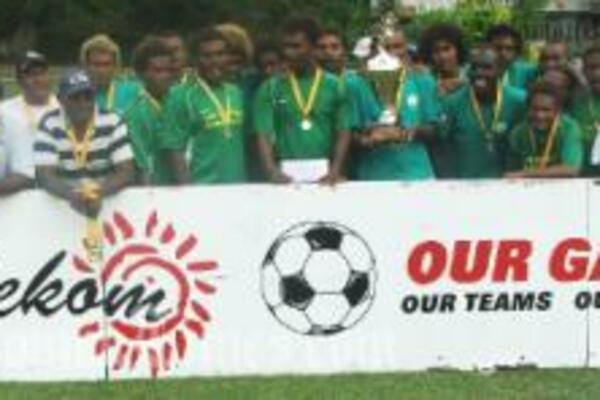 Koloale edged out Makuru in the previous tournament went to reach the final of the O-League where it lost to Auckland City of New Zealand.
Source: Photo Supplied
Share
Tuesday, 19 May 2009 14:11 PM

The Giants of Honiara football are consolidating their strength in preparation for the coming Our Telekom National Club Championship. KOSSA, Makuru and Uncles have all booked a place while Koloale returns as the defending champion. The national club championship will kick off on Monday 25 May 2009.

All four teams have progressed to the finals of the Super 8 competition, which will decide Honiara's representative in the inaugural national tournament. It is clear that any prize money is a mere bonus as all the teams have their eye on becoming Solomon Islands' next representative in the 2010 O-League, Oceania Football Association's premier club competition. Koloale edged out Makuru in the previous tournament went to reach the final of the O-League where it lost to Auckland City of New Zealand.

Koloale's 2-all away draw against Auckland City has triggered a renewed vigor and anticipation as the locals realize that this milestone signals a new beginning. If we can draw with them on their own soil, we can beat them. Now it seems that the O-League title and its glorious million-dollar prize are not so far away after all for Solomon clubs.

There certainly will be new comers to the competition this year. GOSA, from the Western Province, defeated the former champion Kokohale in the semi finals of their qualifying competition and is now the West's top club. The taste of national competition will be new to the club and the regiment of old timers will not make it easy for anyone. Malu United, from Malaita, boosted by a strong local league has made it to the national competition claiming former reps Landowners' place. These two new clubs will want to prove that they are contenders for the title and challenge the big names to this claim.

FASI ROOS is one of the provincial who will return to the competition. FASI ROOS was arguably one of the best provincial teams in the 2008 competition. It is expected that they will put together a stronger showing based on their experience from 2008.

Our Telekom Company Limited has stayed true to its commitment and is once again the major sponsor of this important national football event. Our Telekom was also the sponsor in 2007 and 2008. Their commitment to supporting football in this country through the Our Telekom National Club Championship is expected to continue in the future.

Who wins this years championship will boil down to a mixture of gut determination and experience. In the regard of the latter, Honiara's titans sure have the advantage but as one famous football punter once remarked "once you are on the pitch, everything on paper goes out the window."