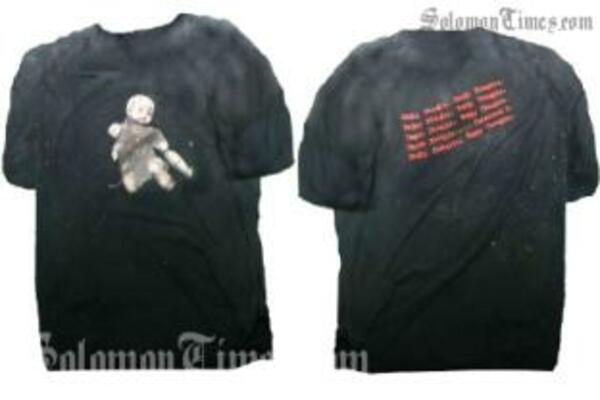 Assistant Commissioner Crime Peter Aoraunisaka today revealed that Police had recovered items of clothing, from the scene of the attack, believed to belong to the offender.
Source: Photo Supplied
Share
Friday, 15 May 2009 12:05 PM

The attack, which occurred around 8pm in Chinatown, left a local man from Tangarare, Guadalcanal, seriously injured.

Police are unable to interview the victim as he is still in a critical condition at the National Referral Hospital.

Assistant Commissioner Crime Peter Aoraunisaka today revealed that Police had recovered items of clothing, from the scene of the attack, believed to belong to the offender.

"Honiara Central CID are investigating this matter and urges anyone who knows the person who normally wears these clothes to come forward and help identify him," Mr Aoraunisaka said.

"A black t-shirt and cap was found. This black shirt has a picture of dolls on the front and five lines of red writing on the back side with the words Happy Thoughts, Happy Thoughts."

Mr Aoraunisaka said a group of young man attacked the man, a young teacher by profession.

"Detectives have taken a lot of witness statements but still need help to track these attackers down and arrest them. Their enquiries are continuing and we urge anyone who knows these offenders to contact Central Honiara CID on 24421," Mr Aoraunisaka said.

"It is important the community helps Police stop this violence in our streets. Next time the victim could be one of our own family members who is attacked and injured by these thugs," he said.

"Police are working together with the public to stop this kind of intimidation of local people and criminal behaviour in our city."