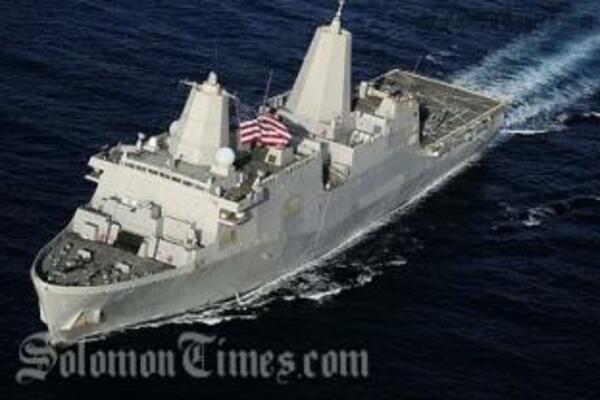 The US Navy has had to cancel the June medical mission to the Solomon Islands as a precautionary measure.
Source: Photo Supplied
Share
Wednesday, 06 May 2009 13:21 PM

A US Navy trip to the Solomon Islands has been cancelled after the discovery of a swine flu case aboard one of the San Diego-based Navy ship.

SanDiego.com reported that one case of H1N1 influenza has been confirmed aboard the amphibious transport dock Dubuque. The US Navy has had to cancel the June medical mission to the Solomon Islands as a precautionary measure.

Health authorities in Honiara say that while the trip would have provided huge help to the overly stretched health workers in the provinces, the cancellation was "the reasonable thing to do."

"Of course it would have been good for them to come and assist, but I think the risk was just too much," stated one health worker. "We hope that the problem is quickly addressed so that we could work with them on a different date."

SanDiego.com reported that the ill sailor has been treated with the antiviral drug Tamiflu and has been told to stay home until he recovers. Several who live aboard the ship have been moved to barrack rooms ashore.