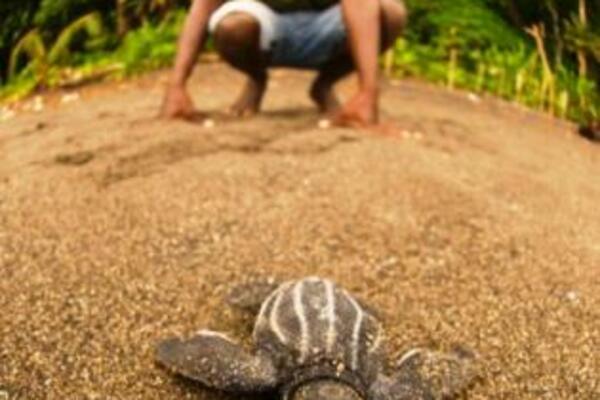 More than 1000 endangered green and leatherback turtles hatched from nests on Tetepare beaches.
Source: © Anthony Plummer
Share
Monday, 04 May 2009 09:11 AM

The Tetepare Descendants' Association (TDA) is celebrating a record-breaking turtle hatching season on Tetepare Island in the Western Province.

At the close of the turtle-hatching season on Tetepare last week, the Tetepare Descendants' Association (TDA) announced that more than 800 critically endangered leatherback turtles hatched on Tetepare beaches during this season.

And almost 300 endangered green turtles hatched on Tetepare, where rangers have been working to save these endangered turtle species.

TDA Conservation Advisor Anthony Plummer, an Australian marine biologist working with the TDA through Australian Volunteers International, said the record number of hatchlings on Tetepare was thanks to the hard work of the TDA rangers.

"We've seen a huge increase in hatchling numbers this year," Mr Plummer said. "We have never had this many hatchlings on Tetepare in the history of our turtle program."

"It's a great result for these endangered species, and we hope to build on this success next season," said Mr Plummer.

TDA rangers have been stationed on Tetepare beaches since October last year, keeping watch over nesting leatherback and green turtle mothers, relocating nests in danger of inundation from rising tides, and protecting nests from predators such as monitor lizards.

"They work from dusk to dawn, patrolling the beaches on foot by the light of the moon, relocating nests and tagging turtles in the middle of the night, and keeping watch over hatchlings to protect them from predators as they dig out of their nests and crawl to the sea.

"They do all this to give this species a better chance of survival, so it's extremely gratifying for them to see their hard work rewarded by these terrific hatchling numbers.

"And none of this would be possible without the support of the Sustainable Forestry Conservation Project of the European Union, and the WWF," he said.

Tetepare, the largest uninhabited island in the South Pacific, is a globally important breeding ground for leatherback and green turtles, which nest on the island's volcanic black-sand beaches. The 120-square-kilometre island is a conservation area of international significance, and is managed by the TDA.

Mr Plummer said communities on the neighbouring island of Rendova were also getting involved in the TDA's turtle conservation project, and were recording and protecting leatherback nests on their beaches.

"We're still getting final hatchling numbers from the villages we are working with on Rendova, but we believe this has been a particularly successful year for our community turtle conservation program too," he said.

"These communities are showing the world that everyone can play an important role in helping leatherback turtles survive."

Mr Plummer said eco-tourists visiting the TDA-run ecolodge on Tetepare were also helping to save the species by supporting the TDA and local communities working to conserve turtles.

"The nesting leatherbacks and hatchlings have been a hit with ecotourists this year," he said.

"And our turtle-tagging program, which we run all year round, is also proving popular with visitors who are keen to in see our conservation program in action."

Leatherback numbers in the Western Pacific have declined by more than 90 per cent since the 1980s. Mr Plummer said leatherbacks were facing many threats, including too much harvesting of their eggs and rising sea levels destroying nests.

"It is very important that people don't disturb leatherback nests because there are so few breeding turtles left," he said. "Leatherback turtles could disappear within our lifetime and future generations of children in the Solomons and around the world may never get the chance to see them," he said.

Named for the smooth leathery skin on its back, the leatherback is the largest sea turtle in the world. They can grow to more than 1.75 metres long and weigh more than 500 kilograms. They have been recorded diving more than one kilometre deep.

Anyone wishing to visit Tetepare to see turtle tagging and other conservation activities all year round, or nesting and hatching leatherbacks from October to April, can contact the TDA office in Munda on 62163 or email tetepare@solomon.com.sb or visit the TDA's website: www.tetepare.org.