39 YO Woman Arrested for Brewing Kwaso in Honiara 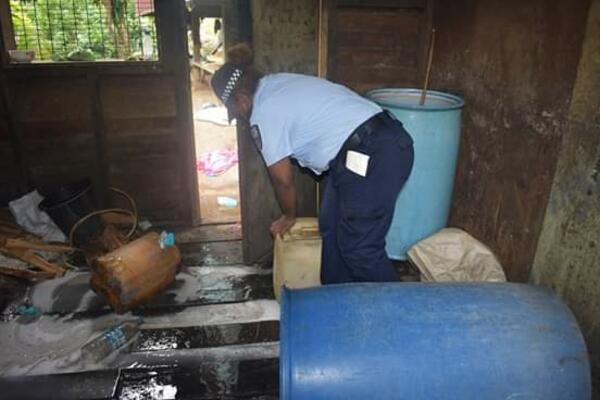 A female officer with the containers of kwaso during the raid.
Source: Supplied
Share
Tuesday, 27 August 2019 07:17 AM

Officers of the Royal Solomon Islands Police Force in Honiara City have arrested and charged a 39 year-old woman for an allegation of brewing kwaso at Aekafo, Vara Creek in Central Honiara on 23 August 2019.

The accused and his nephew, a 30 year-old male were taken by surprise when police officers raided their home and arrested the accused.

Provincial Police Commander (PPC) Honiara City, Superintendent Stanley Riolo says, “Upon arrival at the suspect’s residence, officers of the Central Response Unit (CRU) and officers of the Liquor Unit raided the house and confiscated 38 bottles of 1.5 litres each of kwaso.”

The suspect was then escorted to the Honiara Central Police station where she was detained and charged for a count of Restriction on making liquor contrary to section 50 of the Liquor Act.

“Kwaso brewing in this City is an ongoing problem. People have been arrested over this offence, we have seen increasing number of anti-social behaviours in our communities all related to related alcohol,” says PPC Riolo.

Police officers checked houses in the Aekafo area and discovered the process of cooking kwaso was in progress while the suspects had already escaped.

“I would like to thank my officers of the CRU and the Liquor Unit for their hard work and dedication in trying to curb kwaso brewing in Honiara City.”

PPC Riolo adds: “I would like to see our communities work together with the police to curb kwaso brewing. If you see someone in your community brewing kwaso please report them to your nearest Police station, or call in at the Honiara City Liquor Unit. We have seen enough anti-social behaviour in our communities. Let us all work together to fight kwaso.”

The Liquor Unit can be contacted on phone 25879.