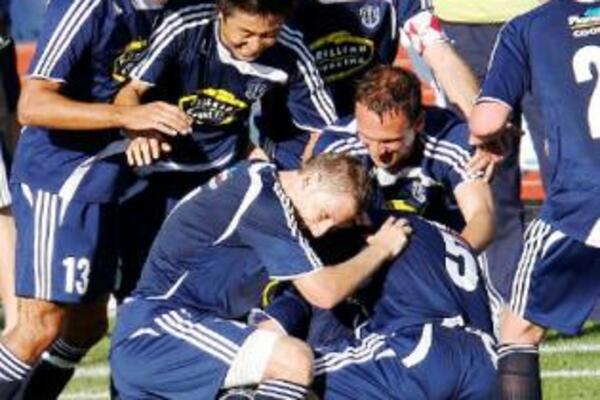 Victory over Waitakere United in Group A of the O-League has seen the club progress to the final where they will take on Koloale FC of the Solomon Islands to determine Oceania's champion club side.
Source: Photo Supplied
Share
Friday, 10 April 2009 10:13 AM

Thousands of soccer fans in Solomon Islands are waiting nervously for the finals of the O-League. Koloale FC has found itself in a situation where they represent not only the hopes of its fan base but also that of a nation craving for a prestigious title.

Not many people in the Solomon Islands know much about their upcoming rivals, Auckland City FC. Waitakere FC has seeked the service of Solomon Islanders, so, in a way, they have a small following in the country, proud of their fellow countryman showing their talents in the New Zealand top league. So for the benfit of those who do not know, here is a rundown of Auckland City FC, the only team standing in the way between Koloale FC and soccer glory.

Auckland City Football Club is based in Auckland, New Zealand's largest city. The club competes in the eight-team New Zealand Football Championship (NZFC), which is the highest level of domestic football in the country.

This new competition was formed in 2004. Auckland City it's reigning champions and have won the competition in four of the five years since its inception.

Auckland City FC is an amateur club with most players having full-time occupations outside of football.

In the inaugural 2004/05 season Auckland City FC beat cross town rivals Waitakere United 3-2 in the Grand Final. Keryn Jordan, now an Auckland City player, was one of the goalscorers for Waitakere United, whilst Liam Mulrooney and Grant Young, who scored twice, secured the Championship for the highly favoured home team.

Auckland City began their second NZFC campaign the same way they finished off their first and led the competition for most of the season.

The 2005/06 Grand Final saw the team defeat Canterbury United 5-4 on penalties after the score was tied 3-3 at full time.

Auckland City followed this Grand Final success with victory in the 2006 Oceania Club Championships which were held at North Harbour Stadium in Auckland. They defeated AS Pirae, of Tahiti, 3-1 in the final and remained undefeated throughout the tournament.

The Oceania title saw Auckland City represent the Oceania Football Confederation at the FIFA Club World Cup in Japan in December 2006. This tournament featured the champion club side from each of FIFA's six Confederations, including the mighty FC Barcelona of Spain.

Just five days after Auckland City's match in Tokyo, they had to play rivals Waitakere United in a crucial NZFC match at Kiwitea Street. After trailing 0-3 at half time, Auckland City produced a stunning comeback to win 4-3 with a 99th minute winner from Paul Urlovic. Referee Neil Fox produced an astonishing nineteen yellow and red cards in this memorable match, widely considered to be the most exciting since the competition began in October 2004.

At the end of an extremely long and challenging 2006/07 season the same two sides met again in the Grand Final where Auckland City triumphed once more by 3-2, to claim their third successive NZFC title.

The 2007/08 season was a disappointing one for Auckland City and was the first time the club had tasted failure in the NZFC. Finishing 3rd was a major setback for a club that has set such high standards for itself.

This past season has seen Auckland City regain it's status as the premier club side of New Zealand domestic football. A 2-1 victory over arch rivals Waitakere United in the NZFC Grand Final, with goals to Keryn Jordan and Paul Urlovic, saw the club claim it's fourth NZFC title in the past five years.

Further victory over Waitakere United, in Group A of the O-League, has seen the club progress to the final where they will take on Koloale FC of the Solomon Islands, in a two-legged final, to determine Oceania's champion club side. The winner will secure the US$500,000 playoff spot at the FIFA Club World Cup scheduled to take place in the United Arab Emirates from 9-19 December 2009.

In a press statement Auckland City FC says it is under no illusions as to how difficult the upcoming task will be. It says it has the greatest of respect for Koloale and is eagerly looking forward to this battle of Oceania's top two club sides.

Furthermore the club stated that it is very proud and excited by the opportunity to travel to Honiara and experience the culture, passion and hospitality of the football-loving people of the Solomon Islands.