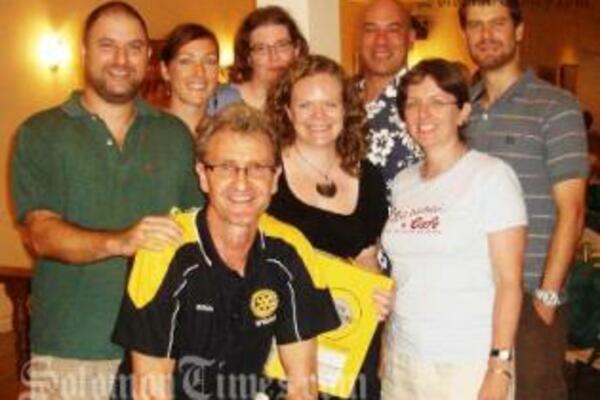 Saturday night saw 110 people test their wits against Quiz Master Peter Baldwin and official Adjudicator Eric "The Hard Man" Muir as they battled to prove who were the smartest 8 people in Honiara (at least for a few hours).

It was a fun night held at Iron Bottom Sound Hotel as a major fundraiser for Ross
Andrewartha, who is participating in the Great Aussie Bike Ride (GABR).

The organisers Peter Baldwin, Kate Halliday and Gabby Brown have worked tirelessly
over the past month to organise the night to support Ross. Peter Vida provided great
support on the night doing the official score keeping.

Ross, a local Rotarian, is using his passion for bike riding for a good cause: raising money for mental health research. He will take part in the GABR and ride some 9817km from Darwin to Melbourne via Perth and Adelaide over 104 days later this year.

Ross, well known for his involvement in triathlon, said "Tonight again proved how
generous nature of Honiara residents and I am very grateful to the organisers, the
participants and the numerous sponsors who helped make the night a great success.
On behalf of Rotary Heath, thank you very much."

The 'Marmalade' team, a mixed group representing Australia, NZ and Belgium, won the Quiz in a nail biting tiebreaker. "We really enjoyed the night and had a lot of fun. Well done to the organisers. It was a great range of questions and professionally conducted. Big thanks to the sponsors and the prizes were fantastic," the winning team captain Kate Sullivan said.

Also during the evening, Alex Wang, owner of the Iron Bottom Sound Hotel was
presented an Appreciation Certificate for his corporate support for the GABR. Alex
said he was impressed with the cause and very happy to help Ross towards his
SBD100'000 target. "It is a great cause and we are proud to become a Silver
Supporter," said Alex.