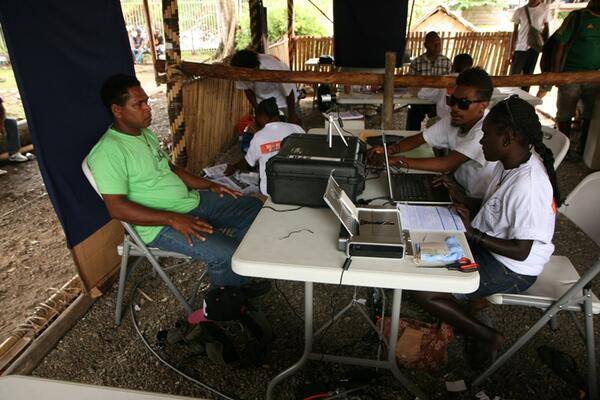 He says that the new biometric system is in fact a huge step forward for the country’s electoral system, one that would ensure that the elections are transparent.
Source: Photo supplied
By Tony Kando
Share
Tuesday, 04 November 2014 11:03 AM

More than 3,000 voters returning from studies at the end of the year will not be able to vote at the upcoming National and Provincial Elections.

Tertiary students studying at USP, UPNG, FNU and other Universities in New Zealand and Australia are slowly returning home for holidays.

“I am aware I am not going to vote, that is unfortunate since I would have wanted to be part of choosing our next leaders,” said Troy, a second year engineering student studying at FNU.

“I think this is an important segment of the electorate that has been left out, we were hoping we would have been given the opportunity during our midterm break but nothing was ready at that time.”

Emily, who has just returned from New Zealand having completed her business management studies, says that not much thought has been given to those Solomon Islanders studying and working abroad.

“We feel left out, we want to be part of choosing our leaders, and not just bystanders.”

The Electoral Commission’s media office says that they are aware of such situations but could not do much given the timeframe and the logistics involved in registering those in country.

“It is unfortunate but our priority was to have a new list of voters entered into the new biometric system, and the logistics made it difficult.”

He says that the new biometric system is in fact a huge step forward for the country’s electoral system, one that would ensure that the elections are transparent.

“So we can confidently say that we have been able to eliminate the double voting system quite common in the past, which is a huge step forward for us as a country.”

He says that perhaps in the near future there could be possibilities to do such registration online, “but again there are cost considerations and issues to do with data security that must be assessed carefully.”